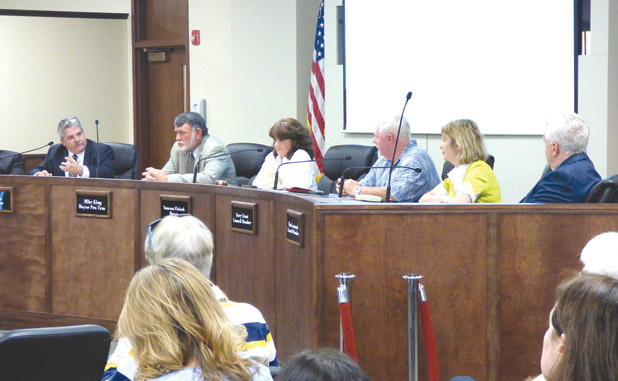 There were no public comments and little discussion prior to the March 17 adoption by the Peachtree City Council of a resolution to develop an intergovernmental agreement (IGA) that could result in extending limited sewer service to Tyrone.

Tyrone recently asked that the Peachtree City Water and Sewerage Authority (WASA) sell 350,000 gallons per day. Tyrone currently has a 250,000 gallon capacity provided by Fairburn and Fulton County. That agreement is set to expire in 2019.

As adopted by the council, the resolution states that the mayor and council authorize WASA “to extend sewer outside the city into the existing limits of the Town of Tyrone for the purpose of providing a maximum sewer treatment capacity of 350,000 gallons per day, within the Town of Tyrone subject to specific conditions as set forth in an intergovernmental agreement (IGA) negotiated among the City of Peachtree City, the Town of Tyrone and (WASA), and the city’s subsequent approval of said agreement.”

An additional section of the resolution, added by city attorney Ted Meeker states that “WASA shall not be authorized to provide any wastewater treatment service, or otherwise receive any wastewater from the Town of Tyrone, until such time as an (IGA) between the city, WASA and Tyrone is approved by all parties.”

Though WASA is an authority, the resolution notes that the council retains approval rights for any extension outside city limits because the city extended its credit in WASA’s prior acquisition of revenue bonds.

The resolution states that WASA is operating at half of its treatment capacity of 6 million gallons per day, “and this capacity is more than adequate to supply the projected future population of Peachtree City at 42,940 residents and the associated growth of commercial and industrial customers as well as existing areas of the city that are not currently served by sewerage.”

There was no time frame noted for when the IGA might be forthcoming for consideration by both councils and WASA.

At 6 million gallons per day capacity, what does Peachtree City use now and what is planned for the future?

The current average daily flow (ADF) is 3.2 million gallons. When taking a 600,000-gallon flow for the 10 percent safety factor and another 1.4 million gallons reserved for future residential, commercial and industrial customers, the balance of 800,000 gallons per day is the “surplus” capacity, City Manager Jon Rorie said at the March 15 meeting.