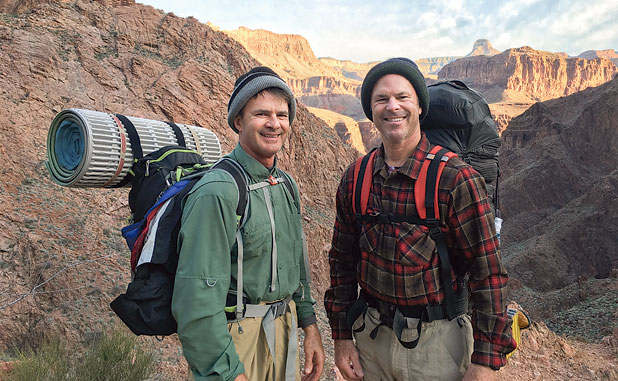 Steve Hammer accidentally ran his cell phone through the washer and dryer a few weeks ago, as so many of us have done from time to time.

That mishap may have saved Alan Hansen’s life.

Hammer bought an iPhone on the spur of the moment to replace his now-ruined flip phone just before leaving on vacation. The Peachtree City resident, a retired pilot, flew his own plane to the Grand Canyon to meet his brother and two others for a five-day hike.

“I kept the new phone turned off and used it mainly for pictures,” he said. “There are very few places to get cell reception at the Grand Canyon anyway.”

It was Feb. 14 on the second day of the hike, while heading for the north rim, about two miles from their campsite when Hammer and his brother saw a man running toward them asking if they had seen a ranger. They had not.

The very athletic young man named Sean had been on a day hike when he encountered Hansen, who was injured and had been lying alone for three days and nights after slipping on some ice on the North Kaibab Trail. Paramedics later told Hammer that Hansen, a 54-year-old from Alexandria, Va., had broken his leg, twisted his knee and likely fractured his pelvis as well.

Hansen, on his third day alone, had dragged his injured body about a mile along the trail before finally spotting Sean and calling for help. The young hiker found a nearby ranger station but it was empty and the emergency phone did not work.

Sean’s cell phone did not work in the canyon but Hammer’s brother remembered a high point not far away where he had used a phone on a previous trip. It didn’t work there either, but Hammer’s new iPhone did. Two combined calls to 911 allowed him to explain Hansen’s location and the entire situation so a rescue team could be dispatched.

But the story — and Hammer’s involvement — doesn’t end there. A few hours later as they neared their campsite they saw the helicopter overhead and felt relieved that the situation was being handled. But then they saw the craft turn back. A short time later a ranger came to the campsite and asked for eight volunteers to hike up to Hansen’s location with a stretcher because the helicopter could not land there.

Hammer and his brother, along with the other two members of their party and four other volunteers, joined the ranger and made the trek to where the injured hiker lay.

Two paramedics had hiked there already and gotten him stabilized before the entire party made the three-mile hike to help. It took some time to get him properly loaded and taken back to the landing spot, and it was about 10 p.m. when the mission was completed, but Hammer said the weather was cooperative and it was a clear night, with all of the participants wearing helmet lamps now commonly used by hikers and bicyclists.

Normally a trip to the hospital would take place the next day, but paramedics advised that Hansen needed to get there for surgery as soon as possible. The National Park Service helicopters are not authorized to make that trip at night, Hammer said, but a nearby law enforcement helicopter was contacted and took Hansen about 80 miles to a Flagstaff, Ariz., hospital.

A paramedic said that if Sean had not found Hansen when he did, there was a good chance that Hammer’s hiking party would have encountered his dead body on their hike the next day. The forecast for that night included low temperatures in the 20s and the injured man was without a sleeping bag or any kind of protection against the elements.

A total of 158 people were airlifted out of the canyon last year, according to Brandon Torres, chief of emergency services for Grand Canyon National Park. But the vast majority of those incidents took place during peak summer months.

“Access to the North Kaibab Trail is very difficult from the top in the winter since the road to the north rim is closed,” said Torres. “There are fewer people that hike that trail this time of year.”

Hammer has hiked the Grand Canyon about a half-dozen times and his brother, who lives in Louisiana, has done probably twice as many.

“It’s very different hiking compared to other places,” he said. “We’ve done some hiking in Colorado along the Continental Divide and on the Appalachian Trail, but the Grand Canyon is a whole different realm because it is so steep and hard like a concrete road, which is tough on your joints. There were some people out there who were extraordinarily fit, much more so than me.”

Hammer was especially impressed by the professionalism of the rescue personnel and how they did their jobs. “We were just glad we could help out.”

He was also glad he had ruined his phone. Looking back, he chuckled as he thought about how he was forced to make that last-minute expensive purchase many of us dread.

“I’ve always used a cheap phone,” he said. “Somehow it was all meant to be, I guess.”

Ghosting in the workplace