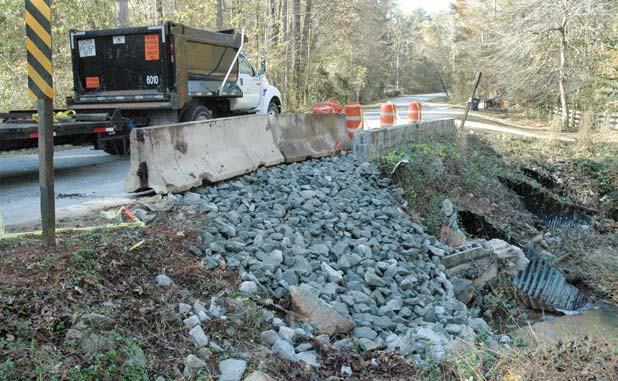 The work to repair the Spear Road culverts that washed out in November saw a delay when it was recently discovered that the soil in the culvert area was unsuitable for the project and required replacement. The Peachtree City Council subsequently approved a soil replacement cost of $73,000 and $51,000 for additional paving, grading and guardrails.

The council on Feb. 18 unanimously approved a change order totaling $51,000 for additional paving, grading and guardrails.

City staff in advocating for the expenditure said an additional 34 linear feet of guardrail and additional paving is needed to super-elevate the road, make it safer and drain better.

During excavation of the road for the installation of the new culverts and gabion walls under Spear Road, which washed out last fall during heavy rains, much more unsuitable soils were encountered than expected in the contract quantities, city engineer David Borkowski said in a Jan. 27 memo.

“In order to continue the work in progress and maintain the project timeline to reopen the road, the City Manager (Jon Rorie) authorized the contractor to replace the unsuitable soils,” Borkowski said.

The price to replace the unsuitable soil was $73,057. That portion of the project was approved earlier in February.

Rorie said the project is expected to be completed by the end of February.

The council in December approved $366,000 to repair the culverts and road shoulders that sustained significant damage after heavy rains caused the wash-out.

Given the washout, the previously budgeted project was moved up on the priority list.

The project is budgeted and is currently funded in the 2014 Public Improvement Program (PIP) fund.