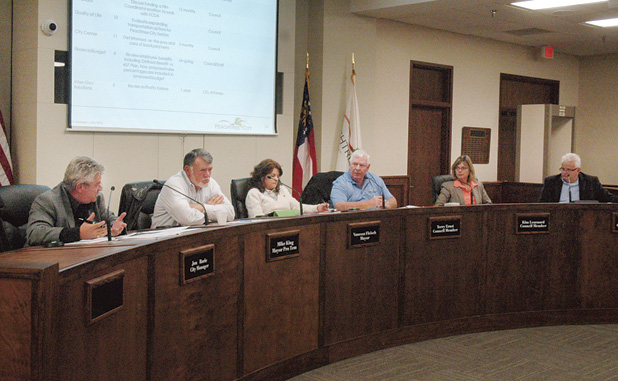 The Peachtree City Council on Feb. 9 held the first of several workshops in lieu of holding the annual retreat. The workshop included a review of the goals and objectives set by the council at the 2015 retreat. The next workshop will be held on March 1.

City Manager Jon Rorie said the issue includes a new fire station in the area, though a financial impact analysis is needed as the development of the area moves forward.

Next up was a review of 14 ongoing goals and objectives.

Two of those dealt with Lake Peachtree. The dredging is near completion, weather permitting, Rorie said. The other dealt with the Battery Way dock replacement, which Rorie said must be completed once the lake is re-filled.

Pertaining to the park venue in the areas around City Hall, Rorie said the city will continue to move forward once the dredging work is completed.

A number of other ongoing goals were in progress, with some to be covered during upcoming budget talks and others being currently addressed.

One of the goals, pertaining to an evaluation of Lake Peachtree’s north lagoon (Tinsley Mill lagoon) and the silt trap adjacent to Ga. Highway 54, figured into discussions later in the meeting.

The silt trap has not been cleaned since 1997, though most of the 15.5-acre lagoon on the north side of Hwy. 54 appears to be free of silt. City engineer David Borkowski suggested possible solutions to cleaning the area, adding that numerous federal laws pertaining to silt removal have changed over the years. The consensus of the council was to further explore the issue. Rorie was asked to contact a mitigation specialist to determine any available strategies.

Another segment of the meeting dealt with seven objectives going forward into the future. While several were eliminated, Councilwoman Kim Learnard suggested that an evaluation looking at expanding transportation options for the city’s seniors could be included in the city’s survey.

As for a review of benefits for city employees, Rorie said that issue will be included in the upcoming budget sessions.

The change in venue from holding an annual retreat to having a number of workshops was Rorie’s idea.

Commenting on the change in procedure, Rorie said a series of evening workshops would provide better opportunity for citizens to participate in the process and allow council to focus on issues and challenges the community faces.

“We want input from our citizens on who we are as a community, and what we want to be in the next 20 years. This is more than a one-day event, so we need to take the time to gather the input for proper planning,” said Rorie.

A number of other workshops in the council chambers at 6:30 p.m. at City Hall will follow. Those include:

• March 1 — Statistics and trends: Are we the same community as 20 years ago? What type of community will we be 20 years from now? Housing stock, retail vacancy rates and industrial locations will be discussed. The meeting will also include demographics and growth rates of surrounding cities and counties.

• April 5 — Citizen engagement/citizen surveys review, assessment and city services expo. Discussions will include the One PTC-Community Assessment and comprehensive plan, a services assessment and a 2016 Citizen Satisfaction Survey to see what citizens think about their community life and city government.

• May 3 — What service levels are adequate to focus on the basics of the Peachtree City “brand.” the workshop will examine code enforcement public safety and recreation.

• June 7 — This workshop will examine City Council goals and objectives.