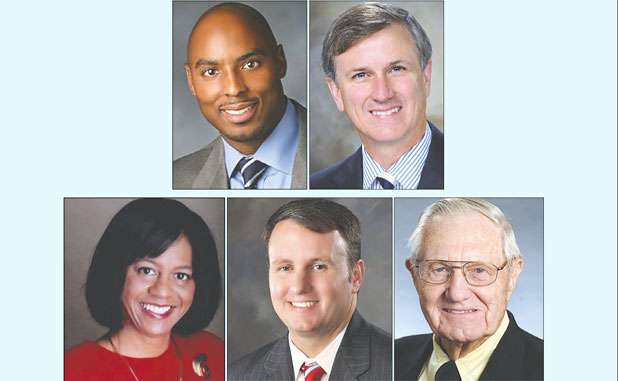 Fayette’s legislators detail their priorities for 2016

The 2016 session of the Georgia General Assembly is about to begin. With that, The Citizen contacted members of the Fayette County legislative delegation to learn what issues they see as priorities and why.

Each of the local members of the was asked to comment on:

1. The issues you see as a priority for the upcoming session, as few or as many as you deem important.

2. Any or all pertinent points you would like to make about the issues you see as a priority.

Five of the seven members of the Fayette County delegation responded by press time. Those responses are included below:

District 63 Rep. Ronnie Mabra, a Democrat who lives in Fayetteville, said he believes passing legislation that will help the economy grow and provide quality jobs is a top priority for the 2016 General Assembly.

“The legislature must prioritize legislation that makes Georgia a global economic leader,” Mabra said. “When we are fiscally responsible we attract new businesses, retain and grow existing businesses, and ultimately create jobs for Georgia families. The first step is to create a budget that addresses the needs of all Georgians while simultaneously promoting responsible financial stewardship.”

Mabra also addressed the proposed casino bill that could come before legislators in 2016.

“I believe the goal of bringing regulated resort style casinos to Georgia is something the legislature should take seriously in 2016,” said Mabra. “A decade ago Georgia took bold steps to attract movie studios to Georgia. Twenty-three years ago we introduced the Georgia Lottery. Both of these measures were hotly debated at the time and the results have been phenomenal (both are billion dollar industries in the state). Though I am currently neutral, I think a responsible casino bill should be argued and all of Georgia should have an opportunity to weigh in either directly or through their elected officials. Both sides should be taken seriously.”

Mabra also spoke on the need for quality education.

“Locally, promoting legislation that keeps Georgians safe and provides equal access to quality education is always a top priority. This includes increased financial support from the state to our K-12 schools so that we help our educators, school administrators and the school board continue Fayette County’s rich tradition of student achievement,” said Mabra. “It also includes supporting bills that our local leaders deem to be important for our community.”

District 16 Senator Marty Harbin, a Republican who lives in Tyrone, noted six issues in the 2016 session that he deemed important.

• Georgia Constitutional Amendment-Opportunity School District: “This amendment will be on the ballot in the 2016 elections and not many are talking about how powerful this move is by state government. This amendment to the Georgia Constitution would give the governor the power to take over failing schools from the local school board. These failing schools would then come under state control. Whether Democrat or Republican, this change would give the governor constitutional powers over local schools. No plans have been forthcoming nor does the amendment include any plan for giving back control to the local board once the problems in those schools have been resolved,” Harbin said.

• Georgia Religious Freedom Restoration Act: “The federal version of the Religious Freedom Restoration Act (RFRA) dates back to 1993, when it was passed by Congress after a controversial Supreme Court decision in 1990 angered both liberals and conservatives. But after Congress passed RFRA, the Supreme Court ruled in 1997 that the Act couldn’t be applied to states. Currently, at least 22 states have their own versions of RFRA laws, as a response to the 1997 Supreme Court decision,” said Harbin.

• First Amendment Defense Act: “This bill would overtly extend specific protections to Georgians, including public employees, who maintain that marriage can only occur between a man and a woman — and act accordingly. This Legislation is seeking to protect First Amendment freedoms, it deserves to have careful consideration and thoughtful debate,” Harbin maintained.

• Funding for Education: “We will see the discussion of casino gambling and horse racing which will be on the floor as solutions to raise additional revenues for the funding of education,” said Harbin.

• Georgia Immigration Laws: “A provision in the Georgia immigration law that requires people to present a form of ‘secure and verifiable’ identification — such as a driver’s license or passport — every time they apply for public benefits, has created massive backlogs in state license renewals for thousands of nurses, insurance salesman and other professionals. Passed in 2011, the law is aimed at blocking illegal immigrants from receiving benefits to which they are not entitled,” Harbin said. “Look for changes to be proposed the better handle this growing issue.”

Also weighing-in on the 2016 session was District 72 Rep. Matt Ramsey, a Republican from Peachtree City, who centered his comments on the state budget and on education.

“Passing a balanced state budget is the General Assembly’s only annual constitutional requirement and it is always the issue that dominates the majority of our time, as it should be,” Ramsey said.

“We are currently operating under at $21.8 billion Fiscal Year 2016 budget.Based on tax revenues over the past several months it is anticipated that the Governor’s revenue estimate for the FY 2017 budget will be an increase over that amount. The majority of new revenues will go to account for expanded populations in K-12 education and Medicaid. Nothing we do is more important than responsibly and thoroughly overseeing how the state government spends Georgians’ hard-earned tax dollars, which is why the budget process will take the majority of our 40 legislative days to complete,” Ramsey said.

“The Commission was appointed by Governor Deal to comprehensively review the funding and operation of K-12 public schools in Georgia,” said Ramsey. “In creating the commission, Gov. Deal commented that its mission was ‘to provide recommendations intended to improve our educational system, increase access to early learning programs, recruit and retain high-quality instructors and expand school options for Georgia’s families.’ My vision for K-12 education in Georgia is a system driven by student need that provides local school and district leaders with real control and flexibility.”

“The commission’s recommendations include a major overhaul of the formula that funds education and a number of measures intended to provide more flexibility to local school districts in how dollars are spent. We must continue to make strides to improve the quality of the education available to Georgia’s children and I look forward to the debate this session.”

Ramsey in 2015 chaired a study committee reviewing issues such as wagering on horse racing and licensing a limited number of casinos as a way to increase needed revenues for the HOPE Scholarship Program.

“Over the course of the summer and fall we held several meetings and heard a great deal of testimony from proponents and opponents of these proposals. The HOPE Scholarship program is not what it used to be and no longer is a 100 percent scholarship as it was for many, many years,” Ramsey said. “It now only pays a portion of qualifying students’ tuition and the authors of these bills believe creating new streams of revenue for HOPE is critical to keeping the program the national model of success it has been for a quarter of a century.”

Ramsey said the study committee will issue a report to the House of Representatives in the days ahead with a summary of everything that was learned.

“(The report) will hopefully help to inform the body as we consider these proposals in the upcoming session,” said Ramsey.

District 34 Senator Valencia Seay, a Democrat from Riverdale, also listed a number of priorities for the upcoming session. Among those were oral healthcare/dental hygienists receiving more education to educate public on preventative measures, education funding, and jobs for inmates who receive early release.

“I’m working on a piece of legislation that would make significant strides in the oral healthcare of all Georgians,” said Seay. “My bill will call for more education for dental hygienists so they have ability to educate patients on oral health care focusing on preventative messages such as flossing and cleaning. This would go a long way in ensuring that all Georgians have access to proper oral healthcare as we know that preventative care is arguably the most important kind of care for the overall health of our citizens.”

Pertaining to education funding, Seay said, “Education is the foundation that empowers our young people to grow and mature into productive members of society. As our economy continues to improve, and with rising state revenues with each passing month, I look forward to our state budget including a significant investment for K-12 education and the benefits that will be seen in both Fayette and Clayton counties.”

Seay also commented on jobs for inmates in the early release program.

“There are on-going discussions about allowing certain, non-violent offenders to be eligible for early release. For those Georgians who qualify, it will be a great opportunity to jump start their lives and reintegrate themselves into civilian life,” Seay said. “However, it is essential that these individuals have access to jobs and affordable housing so that they have the best chance to succeed. I’m currently exploring options that would offer Georgia companies incentives who employ those that are eligible for early release and will work with my colleague’s in the legislature and the executive branch for a mutually beneficial solution.”

District 73 Rep. John Yates, a Republican from Griffin, in his response said, “The budget is always the one big outstanding item. As chairman of the Defense and Veterans Affairs Committee, veterans always come first with me. Veterans benefits are also very important.”

Yates said also of top importance in 2016 will be the cannabis oil bill to help children with seizures. Cannabis oil contains the psychoactive ingredient in the marijuana plant.

“The biggest problem will be persuading the federal government to refrain from stopping us,” Yates said.