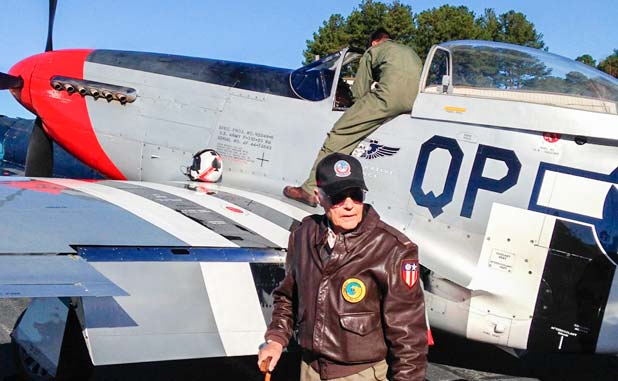 World War II pilot Paul Crawford fulfilled his dream of flying in a P-51 Mustang like the one he commanded 70 years ago in China, where he flew 29 missions until he was shot down in 1945.

Now 91, Buckhead resident Crawford was delighted when the Commemorative Air Force Dixie Wing in Peachtree City took him up Dec. 15 in their restored P-51, a perfect blue-sky day for flying.

Crawford visited the Dixie Wing headquarters at Falcon Field Atlanta Regional Airport in Peachtree City to talk with the Wing members and climb into the restored warbird that the Wing operates. He lovingly touched the nose and wing of the aircraft when he first walked up to it, reuniting after a 70-year separation from his old plane. Navy captain Al Armstrong, a CAF Dixie Wing member, helped Crawford into the back seat of the P-51 and gave him an exhilarating 30-minute flight, complete with many of the maneuvers Crawford used to do.

After the flight, Crawford talked about his experience with the Flying Tigers in China, and his belief that the P-51 was the best fighter plane of its day. “There’s nothing in the world like that airplane,” Crawford said. “I loved doing the maneuvers again.”

Crawford was surrounded by several friends; his daughter, Marsha; and dozens of Dixie Wing members eager to have their pictures taken with him and  to shake his hand and thank him for his service. He brought several artifacts from his flying days, including his old flight jacket, and a number of items presented to him in at a recent 70th anniversary reunion celebration in China.