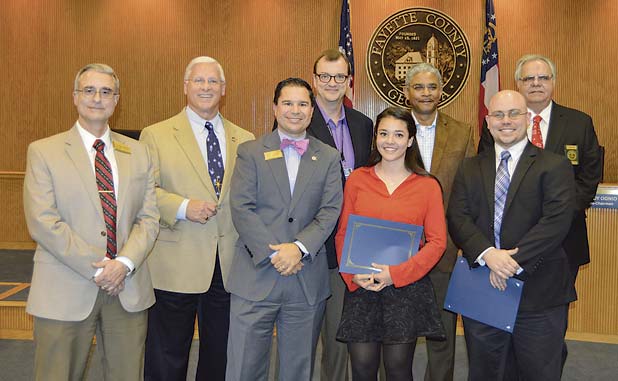 A few local students were honored at the Dec. 10 Fayette County Board of Commissioners meeting by State Court Judge Jason Thompson for their recent service as interns in his court.

The internship program is one of several initiatives Thompson has wanted to start since he was sworn in two years ago, to streamline his office and make it more efficient while dispensing justice.

In talking about interns, Thompson noted that many law students apply to work at large firms that bring with them good pay as well as other amenities. “That is what we have to compete with,” he said.

Daniel Richardson is a third-year law student and served last summer as one of Thompson’s two law-school interns.

“It was refreshing to hear about someone like Daniel who wants to be a public servant. He wants to be a prosecutor or a public defender and perhaps even a judge in the future. That’s where his passion is.”

Thompson’s staff attorney was able to get a grant last year from the Association of County Commissioners of Georgia to pay the two interns so there was no cost to Fayette County.

The interns help with all of the “behind-the-scenes” work and they are a big reason the court is caught up on all of its civil cases, Thompson said. “They put in countless hours to make sure there is not a backlog in our judicial system.”

Alexa Yanar is a senior at Sandy Creek High School. She was one of the first two high school interns they used through a collaboration with the school board.

“We were essentially her classroom,” said Thompson.

Yanar helped with various office duties as well as in the courtroom. “She was a valuable resource behind the scenes helping ensure that I could stay in the courtroom processing cases there,” said Thompson.

Another Sandy Creek student, Ifeacho Awachie, took part in the program but could not attend the meeting.