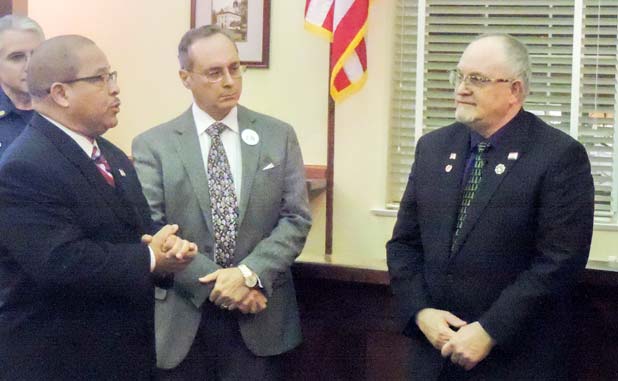 Fayetteville’s Christmas present to its residents and commuters won’t be finally realized for another 18 months, but in the meantime, residents are sure to incur delays in the heart of the city.

On Thursday, the city approved a bid of $4.3 million from Southeastern Site Development Partners to start the Ga. Highway 92 and Hood Avenue realignment.

Through the 2004 Special Purpose Local Option Sales Tax (SPLOST) there is $7.8 million in Fayette County’s share and $645,000 in the city of Fayetteville’s share dedicated to the project.

The purpose of the project is to interconnect Hood Avenue and Hwy. 92 North and to extend the road access across Hwy. 85 to Kathi Avenue and Jeff Davis Drive North. The new road system will also include an extension to Church Street. City officials said this will greatly improve traffic circulation and safety in the Ga. Highway 85 north area.

The city plans to break ground on the project Dec. 29 at 10 a.m. at the vacant lot next to Michaels.

Public Works Director Chris Hindman said the first six months will deal with engineering and utility issues,so construction is not likely to start until closer to summer.

In other action, the city:

• Adopted a social hosting ordinance. The ordinance is virtually a mirror image of Peachtree City’s and puts an onus on parents or adults who allow parties or other events at their homes with minors and alcohol present.

• Approved two rezonings. The first request is for a nearly 34-acre tract located on Ga. Highway 54, near Yorktown Medical Center. The property was rezoned from C-3 (Highway Commercial) to MO (Medical Office). The change would allow an assisted living facility to be constructed. City officials did stipulate the architectural plans would have to come back to the City Council for a final review. The council wants to make sure the facility blends in with other buildings in the area, specifically Piedmont Fayette Hospital.

The second rezoning saw a 19-acre site at Promenade Parkway, across from the Fayette Pavilion. rezoned from C-3 (Highway Commercial) to M-1 (Light Manufacturing) to develop an industrial park.  The applicant owns Kenwood Business Park located in the county, and proposes similar buildings with brick fronts and metal sides for the commercial/ industrial/business park. The property would ultimately be subdivided into 18 parcels and replatted.

• Denied extending the city’s Tax Allocation District. The city wanted to add more property to aid in the city’s master plan for downtown Fayetteville, but the measure was voted down unanimously.

• Heard a brief goodbye from outgoing Mayor Greg Clifton. Clifton choked up and said he had “sweaty eyes” during his remarks. He thanked the residents for his service and said the city had made much progress in the last four years.