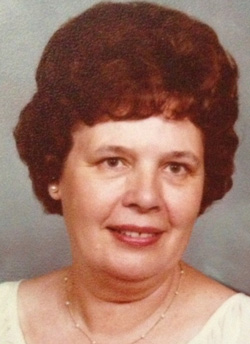 Mavis Leona (Jensen) Schrader was born on May 25, 1922, above her uncle’s butcher shop in the tiny hamlet of Ivanhoe, Minn. Mavis was the first of two daughters of Arthur and Madeline (Stellmach) Jensen. Mavis grew up in Minneapolis, Minn. and graduated in 1941 from Marshall High School. In her junior year of high school, she met “the new boy” in school, who became the love of her life. She married Carlton “Bud” Schrader a year after they graduated from high school and they celebrated their 71st anniversary on September 05, 2013, Bud passed away on January 15, 2014.

Mavis and Bud reared their 4 children, Gail, Nancy, Douglas (Linda), and Susan Vandivier (Van) in Chesterton, Ind. where they spent 47 years of their married life. They moved to Peachtree City, Ga. where Susan and Gail lived. The last 5 years of her life she lived with, and was lovingly and gently cared for by Susan and Van. Just like Mavis had cared for her 4 children many years before. Mavis was a member of Beta Gamma Upsilon Sorority, Junior Women’s Club, Chesterton and Peachtree City United Methodist Church, and she was poll volunteer in Chesterton. Mavis loved football and basketball, and played contract bridge for all the years she lived in Chesterton. She traveled the world with Bud and many of their dear friends.

Besides her 4 children, she is survived by 17 grandchildren; 24 great-grandchildren; sister, Elayne Self (Edward); brother-in-law, Robert Schrader (Shirley); and a host of nieces and nephews. She will be remembered for her sweetness, delight in her family and many friends, and for her huge heart. She set an amazing example for what a daughter, wife, mother, and grandmother should be. We will miss you Mom.

In lieu of flowers, donations may be made to the American Alzheimer’s Association, National Office, 225 N. Michigan Avenue, FL 17, Chicago, Ill. 60601.