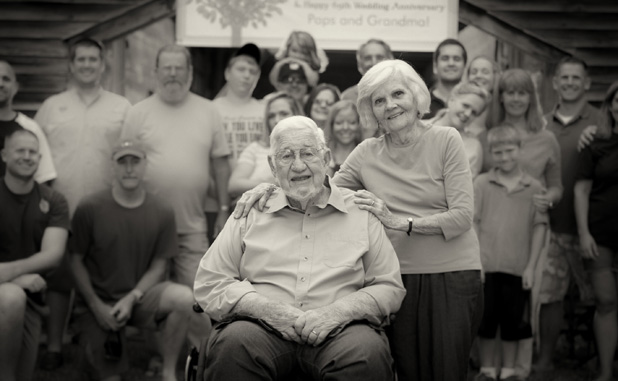 Glenn and Jeanne (Fort) Brewer celebrated their 65th wedding anniversary with a Brewer Family Reunion at their residence on Beauregard Boulevard in Fayetteville. Joining in the celebration were all their children: Kathaleen Brewer (Fayetteville), Barbara and Paul Cooper (California),  Cecilia and Jim Englehart (Pennsylvania), and James and Lisa Brewer (Texas), along with seven of their nine grandchildren (and spouses) and four of their five great-grandchildren.

The Brewers were married on Aug. 2, 1950 at Christ Church on St. Simons Island.

Mr. Brewer is a retired U.S. Navy submarine captain and served 16 years as a Councilman on the Fayetteville City Council.

Jeanne has been a docent of the Holiday-Dorsey-Fife House museum, was one of the original volunteers at the Joseph Sam’s School and is a member of the Fayette County Historical Society.

The couple has lived in Fayetteville since 1986, residing in and restoring the house Jeanne’s grandmother was born in, now known as the Bennett-Graham-Brewer house.