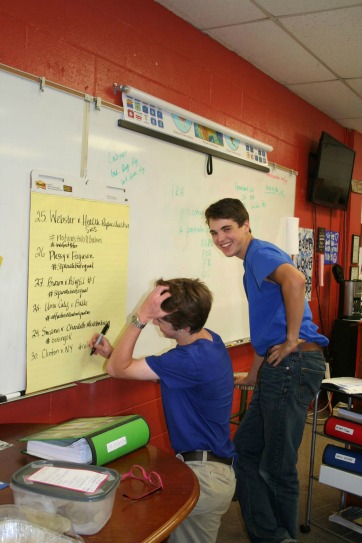 Flint River Academy students are in the final stages of intense study and preparation for the Advanced Placement tests that are given across the U.S. in May.

Last year FRA students exempted or earned credit for college courses. This year students are equally as eager to find out if their academic learning puts them as an equivalent to a sophomore in college.

Government teacher LeAnne Sears devised a creative and cool trending mnemonic device or learning technique that aids information retention. For her AP government students to remember landmark Supreme Court cases that the AP test expects students to thoroughly understand and use in their essay discussions, they created hashtags popularly used in social media.

A simple way to remember Roe v. Wade is to use the hashtag #abortion. But with so many court cases, the waters can get muddy.  Abby Porter thought of the following hashtag to describe Casey v. Planned Parenthood which requires parental consent to have an abortion: #mothermayi.

Engel v. Vitale School was a landmark case that ruled it is unconstitutional for state officials to compose and encourage prayer recitation in public schools. Students came up with #ourfatherwhoartinschool.

The landmark case Griswold v. Connecticut constricts the ability to get birth control, so #thepillisprivate became the quick way to remember the case.

Employment Division v. Smith concerned a Native American denied unemployment benefits when fired because he smoked peyote for religious purposes, so #smokeoneforgod was the easy-to-remember title.

The court’s decision in Village of Skokie v. National Socialist Party determined whether it was a violation of free speech not to be allowed to wear a swastika in a parade through a Jewish village in Illinois. The rhyming hashtag to prompt the memory is #timemannerplacenazicase.

Jumping on board with the hashtag mnemonic was English AP teacher Sally Neal who needed a way for students to remember the harder rhetorical devices like synecdoche, metonymy, and apostrophe. The students came up with #bitsandpieces for synecdoche – when a part stands for the whole like vessel for a ship.

Metonymy is when you substitute a suggestive word for what is meant like when Nixon said “We gave a cold shoulder to De Gaulle and a warm hand to Mao Tse-tung. The students used Churchill’s famous speech #bloodtoiltearssweat.

A last rhetorical device is apostrophe or when it appears the speaker is addressing the air: #whoyoutalkingto.

The Advanced Placement tests begin this week with calculus, English literature and next week government.