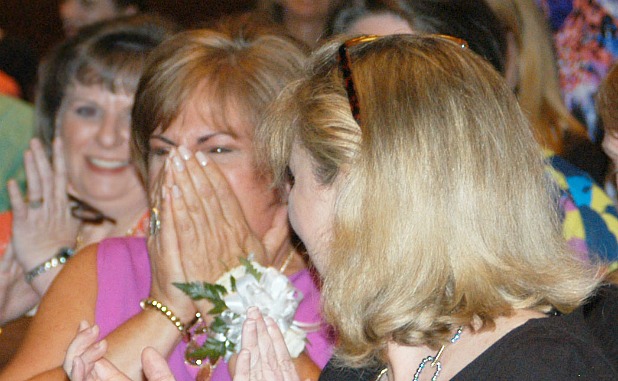 The silence of anticipation erupted into a roar of applause at the recent 2015 Fayette County Teacher of the Year celebration when Gail Frantz was named the winner.

A hush came over the crowd as school Superintendent Dr. Joseph Barrow made his way to the podium and the seconds ticked off like minutes as he opened the sealed envelope that contained the name of Fayette County’s top educator, a fifth grade math and science teacher at Peeples Elementary School.

Frantz was one of three finalists chosen from 26 school-level teachers of the year who were vying for the honor.

“I am happy to accept this award on behalf of all the incredible teachers I have known over the years,” Frantz said to the audience of her peers. “I used to think that the Teacher of the Year was the best teacher around, but I have learned that many of the best educators are far too humble to be recognized easily.  However, I stand up here as a symbol of these quiet hardworking souls who spend their lives happily serving in the classroom for the good of all the children with whom they have been entrusted.”

Frantz likened life to a juggling act with some balls that can bounce back if dropped, and others that will shatter if not handled carefully. She reflected on the hundreds of students she has taught over her 30-year plus career and said “I thank each and every student for the countless memories, and for giving me the gratification I receive for being a part of their lives, if only for a short period. For that reason, I consider my students to be the most precious type of juggling ball, those made of glass, etched in gold.”

Frantz also thanked all of the people in her life who have helped her along the way; especially, her colleagues at Peeples, and her children, Elliot and Lindsay.

“In this juggling game of life, my two children are my most treasured game pieces. Over the years, they have endured many late dinners, sacrificed help with homework as I graded papers, or forfeited family activities as I wrote lesson plans, developed classroom activities, and completed my master’s degree.  They also made many sacrifices as the children of a single mother living on a teacher’s salary.  They are my most special Tiffany crystal juggling balls, and I thank them from the bottom of my heart for their loving support and willingness to give their time to be here tonight,” she said.

Throughout her life, Frantz has made many sacrifices for her students, friends and family, but says she has never seen herself as being special; that is until a recent event that literally changed the way she looks at herself.

A former student from 20 years ago recognized Frantz at a local grocery store, and thanked her for keeping her motivated all of these years. The former student had held onto a souvenir from Frantz’s class, a Frantz dollar bill, to remind her to push through life’s obstacles and be successful.

“I used to give out these dollars bills with my face on them as part of an incentive program,” Frantz said. “Students could use them at the end of the month to buy small, random, fun items. She told me that she had experienced some life challenges, but would look at that Frantz dollar to get the motivation she needed to keep going. She told me she had just graduated from college and was starting a new job at a law firm that Monday.

“As I stood in the parking lot with tears streaming down my face, for the first time in my life, I actually felt special,” Frantz added. “A teacher’s goal is to hope they can impact a child’s life in some positive way. Driving home that day, I was able to tell myself for the first time that, yeah, maybe I am special.”

Frantz will represent Fayette County next year in the Georgia Teacher of the Year competition. The 10 finalists for the state will be announced sometime between late March and early April 2016.

The Fayette County Teacher of the Year celebration is fully funded by private donations from businesses and organizations. The donations pay for the cost of the celebration, as well as fund gifts for the honored teachers.

Each school-level teacher of the year received $100 check from the Fayette County Education Foundation, and a commemorative plaque from Coca-Cola.