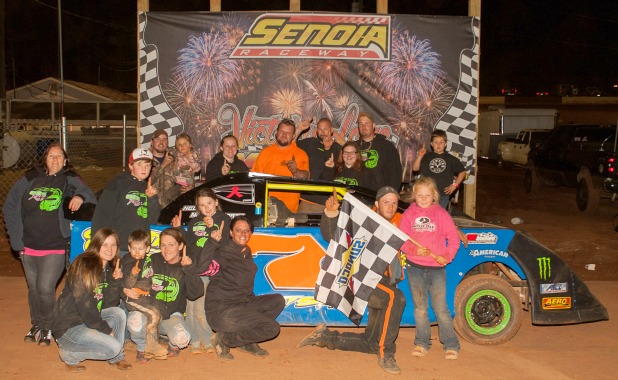 Austin Horton ended his stretch as a bridesmaid and entered the winners’ circle Saturday after holding off all challenges and keeping veteran driver Rucker Orr of Newnan in second place in the Limited Late Model feature at the Senoia Raceway.

Until Saturday, Grantville’s Horton, 19, had come in second for the entire first month of the season at Senoia Raceway.

“Finally glad to be here,” said Horton in victory lane. “We have worked so hard for this one.”

Senoia’s local favorite, Clint ‘Cat Daddy’ Smith, won the Super Late Model feature for the third time in a row while 18-year-old Dylan Knowles of Lanett, AL scored the Crate Late Model victory.  Chester’s Ridge Warren bested the B Cadets while Dustin Smith was handed the top spot in the Hobby Stocks.  Palmetto’s Bubba Harry won in the Legends Cars, Newnan’s Brandon Bright in the Mini Stocks and Derrick Matthews of Whitesburg in the Bombers.

Horton shot out to the initial lead in the Limited Late Model feature.  Multi-time track champion Don Jenkins of Canton moved to second with Orr holding down third.  Seventeen-year-old Senoia driver Joey Armistead was fourth while three more drivers raced three wide on the first lap for their positions.  Armistead would lose the grip in turn one before spinning which brought out the race’s first caution.

Horton and Orr would resume their battle for the lead position as Jenkins, Newnan’s Marty Lunsford, LaGrange’s Dennis Hale and Thomaston’s Shane Fulcher raced for the next four positions.  Lunsford showed his talents are continuing to grow as he battled with the feisty veterans.  The 18-year-old held his own racing in the top five until the final quarter of the race when his car ran into mechanical issues.

A late race restart would give Orr the chance to sling his car to the low side to get past Horton, but that lead was short lived as the man known as the ‘Grantville Grenade’ would fight back and retake the lead.  Horton did not look back winning by four car lengths over Orr.  Fulcher came home third ahead of Fayetteville’s Glenn Morris and Armistead who had come from the back of the pack to snag a top five finish.

Super Late Model fast qualifier Smith was relegated back a few positions for the start of the feature after rolling a five on the invert die.  The lucky benefactor of the roll was Winston’s Michael Page as the fifth fastest qualifier was inverted to the pole.

“We want the drivers to help put on a show for the fans,” said promoter Mayes Massey.  “There are 30 laps for the driver to regain his number one status.  If they are fast enough like they showed in qualifying, and they are a good racer, they will get back to the front by passing some cars.  It was a great show tonight.”

Page would race with Canton’s Scott Groves for several laps at the beginning of the race while Smith made his way to the third place spot.  Early race action also included several cars racing three wide through the corners and down the front stretch at speeds in excess of ninety miles per hour.

Smith would catch Page on lap eight creating a classic Senoia Raceway side by side battle for the lead.  The wider turns have allowed the drivers to race side by side, battle, bump and bang without causing a lot of spins and cautions.  Saturday night’s racing action has now become a weekly show for the fans of the bull ring.

McIntyre’s Steven Bloodworth challenged Groves for the number three spot throughout the final seventeen laps of the Super Late Model main.  Kingston’s Tyler Millwood waited patiently until this point to begin his charge to the front catching Bloodworth and Groves at the five to go mark.

As Smith captured his third straight victory at Senoia Raceway, Page came home in second and Groves third. Millwood would pass Bloodworth in the final two laps to end up in fourth.

Quite a few teenage drivers continue to impress this season at Senoia Raceway and one of those budding stars was shining brightly in the Crate Late Models.  Eighteen-year-old Knowles dominated the feature race going flag to flag to win his second of the season.  Winston’s Mark Page ran second after a great race with Griffin’s Bobby Mills who finished in third.  Sixteen-year-old Newnan driver Trey Wood came home fourth ahead of Alabama’s TJ Brittain.

A streak of two wins was snapped in the B Cadet class when Ridge Warren topped the field.  Warren passed Newnan’s Johnny Stinchcomb on the front stretch before holding back Parrish Duncan of Newnan.  Duncan came into the night with a two race win streak, but he could not catch Warren including a few opportunities as the duo worked lapped traffic.  Warren would win in his first appearance at the track.  Duncan would be second ahead of 18-year-old Jake Traylor of LaGrange, Stinchcomb and 13-year-old Bryson Ussery of LaGrange.

“I love this track,” Warren tweeted to friends after the races.

A post-race disqualification in the Hobby Stock handed the Saturday night laurels to Dustin Smith of Carrollton. Smith finished second to Ryan Ray, but the Mableton driver failed to pass technical inspection after the race. All drivers moved up one position in the official results giving Franklin’s Ben Steele second place and Dallas’ Craig Siler third.

Derrick Matthews narrowly beat Alabama’s Paul Walter in the Bomber division.  Matthews squeezed Walter coming out of the final turn to beat him to the finish line by only a half car length.  Walter had charged from near the back of the pack to finish in the runner-up position.  Griffin’s Alex Rudolph ran a solid third place ahead of Alabama’s Chris Arnett and Lithia Spring’s Michael Lilly.

Bubba Harry made the move during a late race restart to pass 14-year-old Joshua Hicks of Senoia in the Legends Car feature.  Hicks was riding a two race win streak in Legends Cars dirt competition when his car slid to the high side on the final restart.  Harry took advantage with LaGrange’s Jason Treschl and thirteen-year-old Zach Leonardi of Cartersville sliding past Hicks as well.  Harry would cruise to his first win of the season ahead of Leonardi and Treschl.  Hicks would settle in the number four spot with Fayetteville’s John Ponzio completing the top five finishers.

Newnan’s Brandon Bright ran nearly unchallenged for the victory in the Mini Stock division. The best race was for second as Senoia’s Robert Caldwell and defending Mini Stock points champion Harold Leath of Griffin fought over the second place position.  Leath would eventually secure the spot.

The pit gates will open this Saturday at 4 p.m., grandstands at 5pm and hot laps will begin at 6pm.  Heat races and qualifying will start at 7pm.