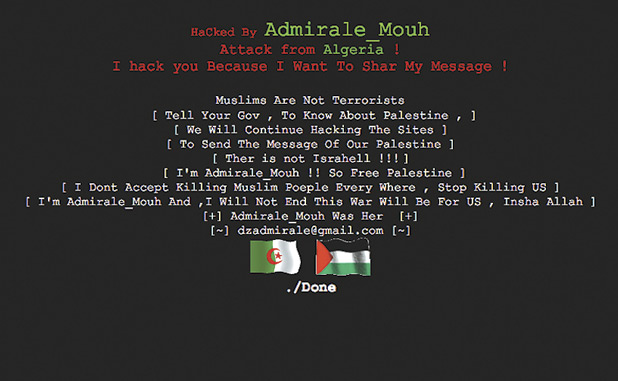 A shadowy group of purported Muslim hackers broke into the TheCitizen.com website Thursday night, deleted critical software files underpinning the site’s operation, crippling it, posted a pro-Muslim, anti-U.S., anti-Israel rant along with animated flags of Algeria and Palestine, and logged out in under 50 minutes, leaving a wrecked site and their sign behind.

The hijackers’ message — from a purported Admirale_Mouh — was taken down at 3:30 a.m. by The Citizen’s web developer, who then began repairs to restore the site to public working order.

“This hacker attack originated from an Algerian address and targeted this newspaper’s website,” publisher Cal Beverly said Friday. “This was an attack on our news website server only, which is located in a hosting center in Atlanta. It was not an attempt to steal any financial or personal information involving us or our clients. Servers containing that information are physically and electronically separate and remote from the website server. No personal or financial information was compromised. The attack seems ideologically motivated.”

The website hijacking has been reported to the Federal Bureau of Investigation.

The Citizen on Friday morning contacted the FBI’s Atlanta Field Office to inquire about issues such as websites hacked or affected in the office’s area of operation. Special Agent Jerome Terry said he had not heard of a hacker or hacker group using the name Admirale_Mouh. Terry noted that there are occasions where people will make up a name or identity used during a hacking incident.

A Google search of the hackers’ pseudonym revealed at least a half-dozen websites with no known connections that had variations of the Admirale_Mouh message still displayed Friday morning.