The Citizen
Monday, September 7, 2020
Sign in
Welcome! Log into your account
Forgot your password? Get help
Create an account
Create an account
Welcome! Register for an account
A password will be e-mailed to you.
Password recovery
Recover your password
A password will be e-mailed to you.
Home Fayette County Fayette private, home school numbers remain steady
Facebook
Twitter
Pinterest
Linkedin
Fewer students attend Fayette schools in 2015 than a decade ago, so where have the kids gone? Not home or to private schools.
While enrollment in Fayette County’s public schools has been declining since 2007, the number of children attending private schools or being home-schooled has remained releatively level, according to a review by The Citizen of those totals over the past 10 years.
The review showed, for the most part, a relatively stable trend over time with approximately 8-9 percent of students attending classes outside the public school classroom.
The school system tracks the number of students attending private schools. The same was true of home-schooled students through the 2010-2011 school year. Figures for home-schooled students beginning in the 2011-2012 school year were kept by the Ga. Dept. of Education.
Figures for home-schooled and private school students as a percentage of school-aged children in Fayette County has fluctuated over the past 10 years, from a combined high of 2,133 students in 2009-2010 to an unusual low of 1,426 in 2013-2014.
Averaging 1,888 students per year, the number of students not in Fayette’s public school classrooms range from approximately 7-10 percent of the total school-age population and generally ranges 8-9 percent each year. (See chart below.) 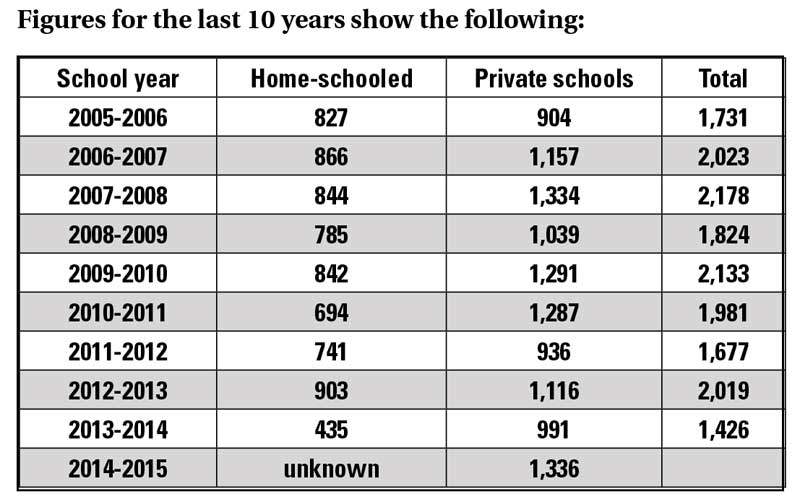