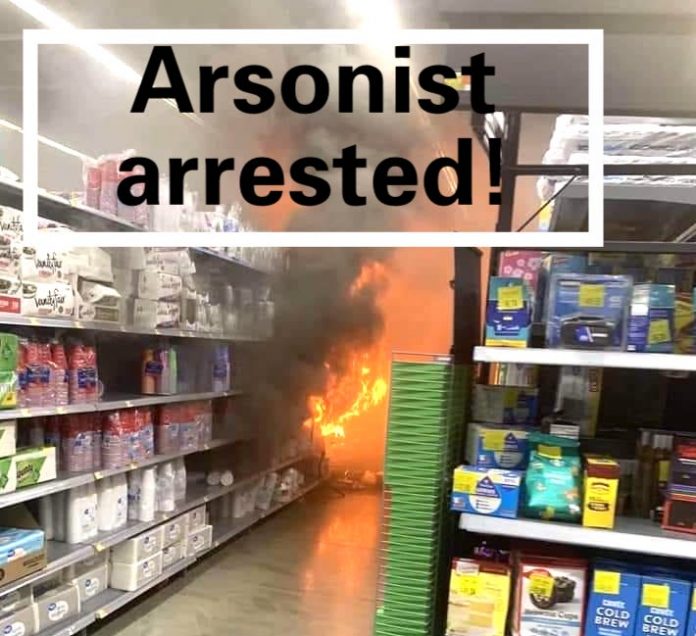 UPDATED — Here’s the news release from the Peachtree City Police Department this morning:

“On August 24th, 2022, the Peachtree City Wal-Mart suffered significant damage to the interior of the store from a fire that was intentionally set in the paper goods aisle.

“Initial eyewitness information was eventually corroborated by video evidence recovered from the damaged servers inside Wal-Mart, leading to a suspect description. Through further investigative efforts by detectives, a suspect was identified.

“On the evening of August 30th, a search warrant was executed on the suspect’s residence in Peachtree City, which included an interview with the suspect who admitted to the starting the fire.

“As a result, a 14-year-old female juvenile was taken into custody and charged with Arson in the 1st Degree. The investigation revealed no evidence of a specific motive or participation in an organized activity.

Police also said the girl used a cigarette lighter by itself to start the multi-million-dollar blaze — no flammable liquid or any other chemical accelerant.

No motive has been revealed, but the juvenile girl is the sole perpetrator, with no others involved, police said. Police have ruled out shoplifting as a motive for starting the fire.

Police with a warrant searched the girl’s home Tuesday evening and took her into custody. Since she is under the age of 17, police by law are releasing no names or other identifying information.

The girl is alleged to have started the fire in the paper goods aisle of the Walmart Superstore shortly after 7 p.m., Wednesday, Aug. 24. The store was quickly evacuated with no injuries. Four Peachtree CIty police officers were treated at the Piedmont Fayette Hospital for smoke inhalation but all were released within hours and returned to duty, according to Police Chief Janet Moon.

Although the huge store’s sprinkler system was working as designed, the fire in the highly combustible paper goods section quickly spread, finally causing portions of the roof to collapse. Firefighters from Peachtree City, Fayette County, Fayetteville, Newnan and Coweta County poured thousands of gallons of water through the holes in the roof before extinguishing the fire by 4 a.m. Thursday. Losses in damage to the store, loss of merchandise and interruption of business for the store are expected to run into the multiple millions of dollars. No timeline has been announced for the store reopening.