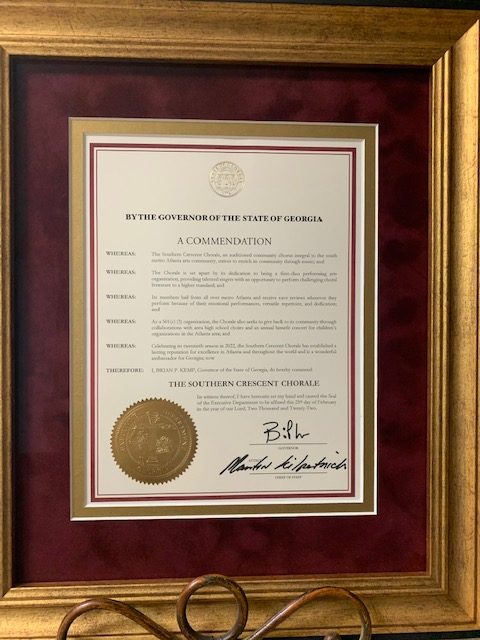 During their recent 20th Season Celebration Concert, the Southern Crescent Chorale was surprised to receive a special commendation from Georgia Gov. Brian Kemp. The commendation highlighted the many accomplishments of this community treasure. The
concert featured the Chorale singing a wide variety of choral music including a commissioned piece by world-famous composer, Mark Hayes. Many former members as well as the Charter Board of Directors were in attendance.

Now celebrating its twentieth season, the Southern Crescent Chorale has established a reputation for excellence and achievement in the south metro Atlanta area arts community. An auditioned community chorus, the Chorale’s mission is to enrich its communities and provide talented and interested singers an opportunity to perform a variety of challenging choral literature with high performance standards.  Chorale members hail from five different metro Atlanta counties and dedicate many hours to making music. The group strives to be a first-class performing arts organization with higher standards, greater artistic and musical capabilities, and more professionalism than the average community chorus.  Their goal for every performance is to combine exemplary technical singing with passion and heart.  They work hard to distinguish themselves based on the quality of their performances and the quality of the literature performed.   Chorale members rehearse each Monday evening and present six concerts each season in the Atlanta area.  Venues include world renowned Spivey Hall, Brightmoor Amphitheater and various churches.  The group has been featured on Georgia Public Radio (WABE 90.1) on numerous occasions.

Since 2004, the Chorale has presented a concert each season to benefit children’s
organizations across Georgia. They have raised over $70,000 for groups such as the Joseph
Sams School, Atlanta Boys and Girls Clubs, Bloom, Children’s Village at Christian City and
many more.

The 20th season final concert will be on May 14 at 7:30 p.m. at Brightmoor Amphitheater.
The concert will feature hits of the 1940s through the 1980s. The Chorale will be joined by
professional soloists Trevor Martin and Amber Greer. Tickets will go on sale at the
Fayetteville library on April 4 or go to www.southerncrescentchorale.org for tickets.