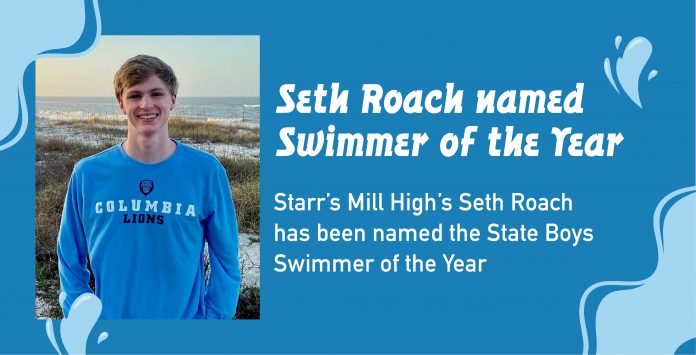 Starr’s Mill High’s Seth Roach is the best of the best in the pool. Roach has been named the State Boys Swimmer of the Year for Class 4-5A.

The award was based on both state meet times and overall performance throughout the season, and Roach was nominated by his coach, Derek Abrams. A committee from the Georgia Swim Coaches Association then selected the most qualified swimmer in each of the classifications.

Roach won a state championship in both the 100 Fly and 100 Backstroke and was also part of the 3rd-place 400 Free Relay and 4th-place 200 Medley Relay teams at the state meet.

“Seth is an overall great swimmer who works extremely hard to compete at the level he does,” said Abrams. “Seth had a phenomenal state meet by winning two individual state titles, but he has also consistently performed well in the pool all year round. With all of his success, he is still a humble young man who is a great role model for younger swimmers in our program.”

Also the Class of 2022 Valedictorian for Starr’s Mill, Seth will make a splash next year at the collegiate level swimming for Columbia University.

“What makes Seth special is his determination to be great, as well as his work ethic. He is one of the hardest working swimmers on the team, and he does all of the little things to make himself faster in the pool,” said Abrams. “Not only is Seth a fast swimmer, but he is also a great teammate to the other swimmers by cheering them on during meets or helping them with their stroke technique in the pool.”