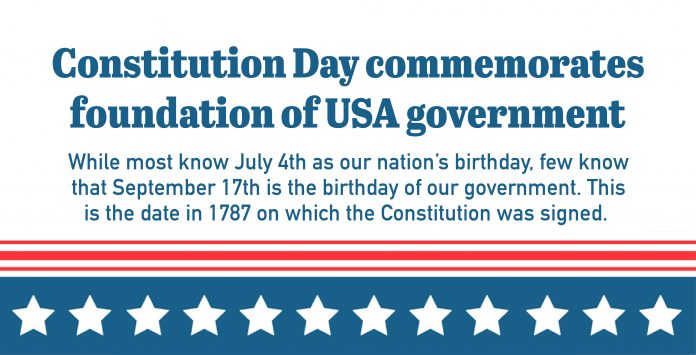 While most know July 4th as our nation’s birthday, few know that September 17th is the birthday of our government. This is the date in 1787 on which the Constitution was signed by 39 brave men.

The Constitution opens with the phrase: We The People. This phrase is important because it means that the government’s power comes from the people. The Constitution also explains how our government is structured, and it tells what the federal government can and cannot do to states and citizens. The United States Constitution is the oldest written constitution of any nation in the world.

Today, we celebrate Constitution Day as a reminder of the ideas that make us Americans. The commemoration continues through September 23 as Constitution Week encourages citizen responsibilities for defending the Constitution, educating on the Constitution’s role as the foundation for our way of life, and encouraging the study of the historical events which led to the framing of the Constitution.