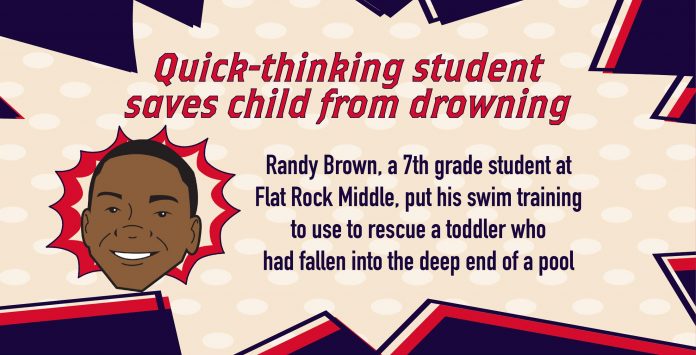 A day by the pool could have ended in tragedy, but the quick thinking of Randy Brown saved the day and saved a life. Brown, a 7th grade student at Flat Rock Middle, put his swim training to use to rescue a drowning toddler who had fallen into the deep end of a pool.

Randy has been taking swimming lessons, and he has even done some lifeguard training, at The Swim Center in Stockbridge, and all of his preparation paid off in a priceless way.

On Mother’s Day, his 2-year-old cousin fell into the deep end of the pool and no one noticed initially. The child’s mother saw him on the bottom of the pool and screamed. Randy leapt into action and dove in to get him.

He had practiced retrieving items from the bottom of a pool, but had never retrieved a body. Even though his cousin was lifeless and limp, Randy was able to bring him to the surface where he was pulled from the water and an adult started administering CPR. By the time paramedics arrived, the child’s lungs were clear and he had been resuscitated.

Though there were other people at the home that were able to swim, none were in the shape to dive 12 feet to the bottom of the pool.

“Thank God Randy was there,” said the toddler’s mom.

For his heroism, Randy will be presented with a Junior Sheriff’s Office badge and a backpack of goodies at Flat Rock Middle’s Honors Day.