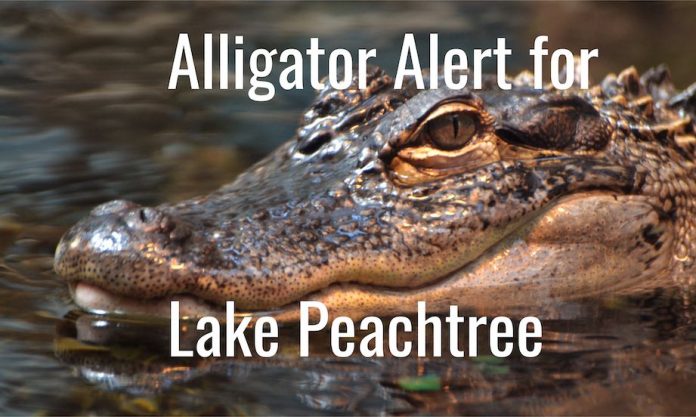 Peachtree City officials are cautioning residents to be aware that an alligator was spotted in Lake Peachtree earlier in the week. Confirmed sightings downstream on Flat Creek occurred in 2016 and again this year in May.

As noted on the city’s Facebook page, “Please be aware that an alligator was spotted in Lake Peachtree on (Nov. 23). We have contacted our Wildlife Control Specialist to evaluate the situation to get this issue resolved. In the meantime, please be cautious and safe in or around Lake Peachtree.”

The southern end of Lake Peachtree, where the dam and spillway are located, is approximately four miles upstream on Flat Creek from where the first alligator spotted in Peachtree City was located.

It was in April 2016 that a 6-foot alligator was spotted in Flat Creek by the bridge along Ga. Highway 74 South in Peachtree City.

Four years later, on May 13, a gator estimated at 8 feet was spotted by a resident who was in the brush by the bridge near the Wilshire Pavilion Shopping Center.

Hyatt said four Ga. Department of Natural Resources (DNR) game wardens arrived, and also spotted the gator at the creek, estimating it to be approximately 8 feet in length.

The area where both alligators were spotted is approximately 2,000 feet upstream from the convergence of Flat Creek and Line Creek. The two converge immediately west of the bridge on Rockaway Road, with Line Creek alter making its way to the Flint River.

On both occasions, the time of sightings is during the courtship and mating season.

“Both males and females reach sexual maturity when they are about six feet long, a length attained at about 10-12 years. Breeding takes place during the night, in shallow waters. Males roar to attract females and to ward off other males. The male circles the female and mounts. Courtship starts in April, with mating occurring in early May,” according to the Smithsonian National Zoological Park.

The sighting of what could have been an alligator was made at Lake McIntosh in June 2016, with the Fayette County Marshal’s Office evacuating the lake and advising people to be on the look-out.

The Lake McIntosh reservoir on Peachtree City west side is situated along Line Creek.