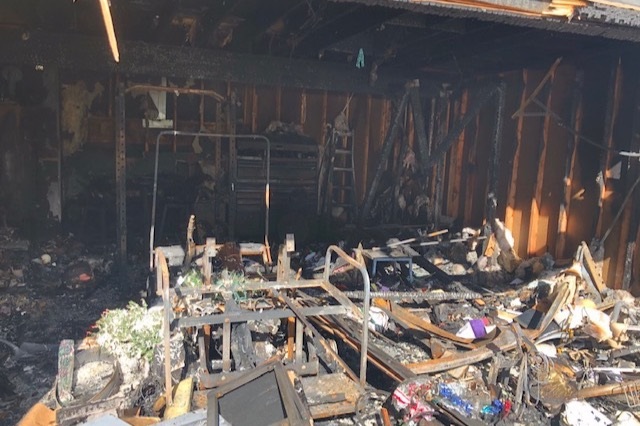 A Nov. 21 fire at a residence on Sumner Place in Peachtree City left a great deal of smoke and fire damage. The residents of the home were present at the time of the blaze and were unharmed. Photo/Robert Smith and Family GoFundMe page.

A Peachtree City home on Nov. 21 experienced significant fire damage and extensive smoke damage from a blaze that began in the garage. The family was at home at the time of the fire, but were unharmed.

Peachtree City Fire Marshal John Dunlap said the fire at the home on Sumner Place began in the garage, with the cause currently undetermined.

The garage, kitchen, an upstairs bedroom over the garage and the attic all experienced the greatest amount of fire damage, while other areas of the house had extensive smoke damage, Dunlap said.

The Smith family said they were startled when smoke was noticed coming from the garage.

“Robert grabbed a fire extinguisher and opened the door, only to be blinded by smoke and flames,” according to Zelda Hyde on a GoFundMe post.

The post noted that Robert and his wife, Mary, are both in the law enforcement/security field, and their training immediately kicked in. Robert works as a security supervisor at Trillith in Fayetteville.

“They quickly collected their children and made it safely outside before flames engulfed the garage/attic and began making its way deeper into the home,” the post said. “The Peachtree City Fire Department then arrived and extinguished the fire, but not before the fire damaged a large portion of the home and belongings, as well as their new family van, along with their secondary vehicle.”

The family includes Robert, Mary and their two young children, all of whom were at home at the time of the fire. There were no injuries as a result of the fire.

Those wishing to help the family can visit the Robert Smith and Family GoFundMe at https://www.gofundme.com/f/let039s-support-robert-smith-amp-family

The fire was accidental in nature, and came as a result of the fireplace damper being closed. Dunlap said the fire was largely contained in the chimney chase.