The Wall Street Journal, print edition in my hands, has some happy things in it this day before Thanksgiving. About that in a moment. 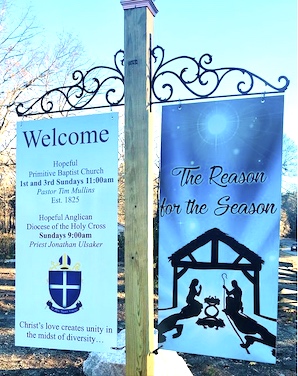 First, about the photo above. It shows a restored Hopeful Church, established as a Primitive Baptist church in 1825 in north Fayette County.

I received the photo from Dean Breest, longtime Fayette resident who volunteers out of the spotlight and behind the scenes in many worthwhile projects, and who played an instrumental part in helping to get this old church restored in recent years.

As you see in the sign, the historic building serves two congregations each Sunday, a Primitive Baptist (as a Presbyterian child I called them “foot-washing Baptists”) and an Anglican. The mailbox in front of the church displays one word: “Hopeful.” I smile while writing this: The church itself, its congregations and its old cemetery nearby are an ode to hope — and happiness.

I think after three score and ten (plus some), I have learned — like many before me — that hope and happiness are inseparable.

So many times in recent days I have read and heard, “Happy Thanksgiving!” Two words together, happy and thanksgiving. It represents both looking back and looking forward.

Happy? In the midst of a worldwide pestilence? you may well ask. I’ve heard some say they are staying up New Year’s Eve just to make sure 2020 really goes away and a new year begins. Many are Covid-weary, exhausted by the lingering dread involved with what used to be normal human activities, like hugging and shaking hands and gathering together for worship or a meal.

The most family-friendly meal of the year has a fence around it this year, even criminal penalties in some states and cities.

Covid or not, Thanksgiving gives way immediately to Advent (from the Latin meaning “coming”) this Sunday, Nov. 29. The celebration of the birth of Jesus Christ is near.

A YouTube clip from the 1954 movie “White Christmas” has Bing Crosby singing to Rosemary Clooney the song, “Count Your Blessings.” That exercise — counting your blessings in the midst of worry and uncertainty — has some immediate payback. It mostly provides some perspective, a valuable commodity. Yes, this bad thing happened, and this bad thing, and even this bad thing — but here are some very good things, even in the middle of the bad. I choose to remember the good people and the good things.

It has happened before, to all of us. And that little church in north Fayette serves as a restored reminder that good things are still here and that many more good things are ahead.

Now, on to the day before Thanksgiving Wall Street Journal, print edition.

• The Dow-Jones Industrial Average set an all-time high record, closing above 30,000 for the first time ever — in the middle of a world-wide pandemic.

• The peaceful transfer of government power has begun in Washington, D.C., as the incoming president’s team is receiving official security briefings.

• Three pharmaceutical groups have announced three different kinds of vaccines to immunize against Covid-19. People could be getting shots before the end of this year.

• Print edition headline: “AstraZeneca is gearing up to vaccinate the world by 2022.” “British drugmaker says more than 3 billion doses will go to every global region.”

• Print edition headline: “More Americans are surviving Covid-19.” “The coronavirus is now killing around 0.6% [six-tenths of one percent] of people it infects, an improvement from April, when the death rate was around 0.9%,” the WSJ reports.

• And on the print edition’s opinion page, two editorials appeared again, as they have every Thanksgiving week since 1961. The first reprints the “chronicle of those memorable circumstances of the year 1620 … as recorded by … the keeper of the records of Plymouth Colony…” It recounts the fearsome struggle for survival faced by those Pilgrims.

The second — “And the Fair Land” — was written in 1961 by the WSJ editor: “We can remind ourselves that for all our social discord we yet remain the longest enduring society of free men governing themselves without benefit of kings or dictators. … And we might remind ourselves also, that if those men setting out from [Europe] had been daunted by the troubles around them, then we could not this autumn be thankful for a fair land.” Fifty-nine years later, we still have much to be thankful for.

Thank you for sticking with The Citizen online, even though we are no longer in print. And I say from the heart, giving thanks for you and this fair land: Happy Thanksgiving to you!

[Cal Beverly has been editor and publisher of The Citizen since February 1993.]