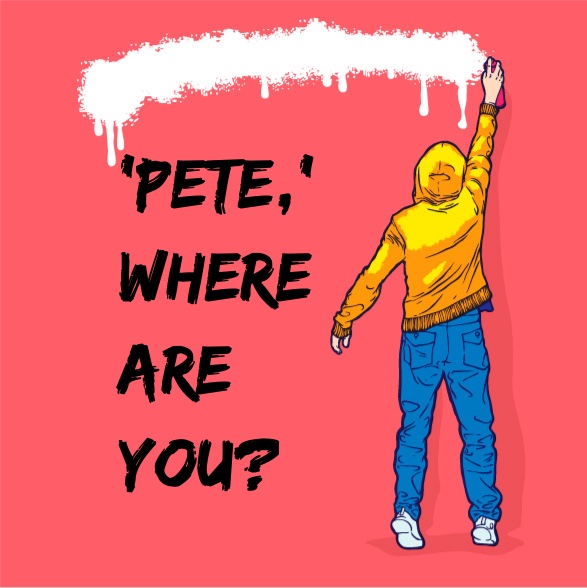 Peachtree City police are offering a $1,000 reward for information leading to the arrest and prosecution of a “graffiti artist” who has tagged the work with “Pete” on 15 occasions since December.

Hyatt noted that there have been a handful of other incidents of graffiti found with no identifiable markings.

The department is offering a $1,000 cash reward for information leading to the arrest and prosecution of the individual responsible, Hyatt said.

Hyatt said the cost in terms of time and resources to clean up the mess on city property is estimated at $2,500-5,000. That does not include the expense in cleaning up the graffiti in private property locations, he said.

The most recent example of graffiti that includes “Pete” was found Jan. 28 on the Lake Peachtree spillway, the northernmost area where graffiti has been discovered, said Hyatt.

Other examples of the same handiwork include:

Graffiti was found Jan. 26 behind Panasonic Automotive Systems on Ga. Highway 74 South, with “Pete” tagged on a storm drain on the cart path, according to police reports.

Also on Jan. 27, graffiti referencing “Pete” was found on electrical boxes at a business on Dividend Drive, reports said.

Other examples of recent graffiti incidents that may, or may not, be associated with the same person include:

Grafffiti was found Jan. 29 on a sidewalk, a tree and a rock at the Glenloch Recreation Center, according to police reports.

Graffiti was also found behind a business at the Braelinn Shopping Center on Crosstown Drive on Jan. 27, police said.

The Braelinn Recreation Center on Log House Road was also a part of the action on Jan. 27, as officers found graffiti on one of the field houses by the cart path, reports said.

More graffiti turned up on Peachtree Station Circle off South Peachtree Parkway on Jan. 27, found on the cart path behind Renew Braelinn.

Just a short distance to the north, officers on Jan. 27 reported more graffiti on the cart path tunnel near Verandah View, according to police reports.