On December 6, TDK Components U.S.A., Inc. (TCU) became one of 36 companies in the state of Georgia to receive a GLOBE Award for international trade activities. TDK is located in Peachtree City.

Established in 2014 by the Georgia Department of Economic Development (GDEcD), the GLOBE Awards recognize companies that have expanded their activities into one or more international markets, and contribute to Georgia’s economic growth.

Governor Brian Kemp of Georgia and GDEcD Commissioner Pat Wilson presented the awards in a ceremony at the State Capitol December 6. TCU President Ken Takekawa and Treasurer Ryuichi Muramatsu accepted the honor on the company’s behalf.

This is the first time that TCU has received the GLOBE Award. The win recognizes the company’s recent expansion of MLCC export activities to Europe. TCU was the only recipient of the award from within the electronics industry this year.

TDK Components USA, Inc. started in Peachtree City in 1986. Since that time it has been processing and distributing multi-layer chip capacitors to customers in North and South America. The company recently began distribution to Europe as well. 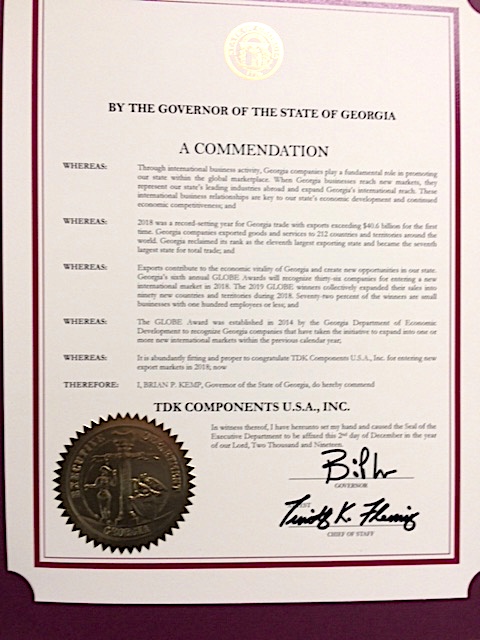