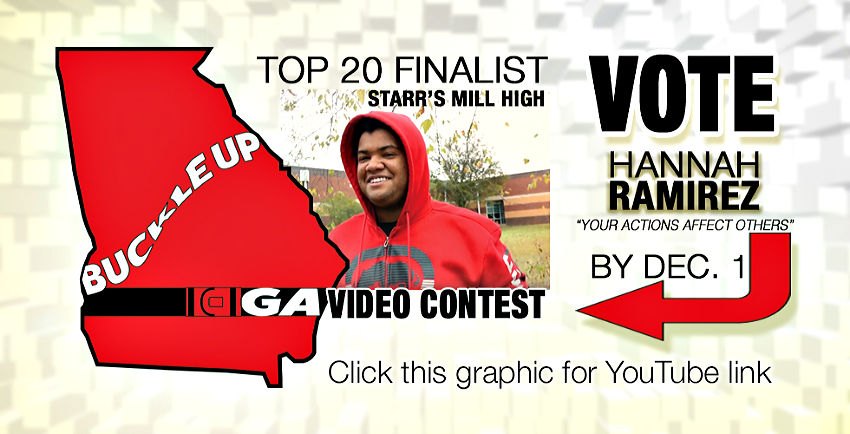 A 30-second public service announcement produced by Starr’s Mill High School student Hannah Ramirez has been selected as one of the top 20 in the state in the Buckle Up Georgia video contest sponsored by Georgia Public Broadcasting (GPB) and the Governor’s Office of Highway Safety.

GPB selected the top 20 entries from video submissions that poured in throughout the state. Now, the public gets to weigh in on who will make it into the top 10 to be considered for one of the top three placements.

Students receive votes for their videos based on YouTube “likes.” The videos are hosted on the GPB 2019 Buckle Up Georgia Video Contest channel at the following link: https://m.youtube.com/watch?v=-AxDk5B7QFs&list=PLMrw7gLLJkYAa_x2pSPAtasA0VbQ6SKZW&index=19.

You can vote for Hannah Ramirez’s video, “Your Actions Affect Others,” now through December 1.

High school students throughout Georgia were invited to create a 30-second video showing why riding without a seatbelt is not a good decision. Although seatbelts save lives, there are still people who choose not to wear them. GPB and the Governor’s Office of Highway Safety hope to spread the message about the importance of wearing seatbelts through public service announcements produced by high school students.

After the top 10 finalists are determined, an independent panel from the Governor’s Office of Highway Safety and GPB will determine the top three winners. The winners will be announced during the Georgia High School Association high school football championships airing on GPB December 13 and 14.

In addition to having their videos aired on television, the first place winner will receive a Macbook Pro, and the two runners-up will receive an iPad Air.