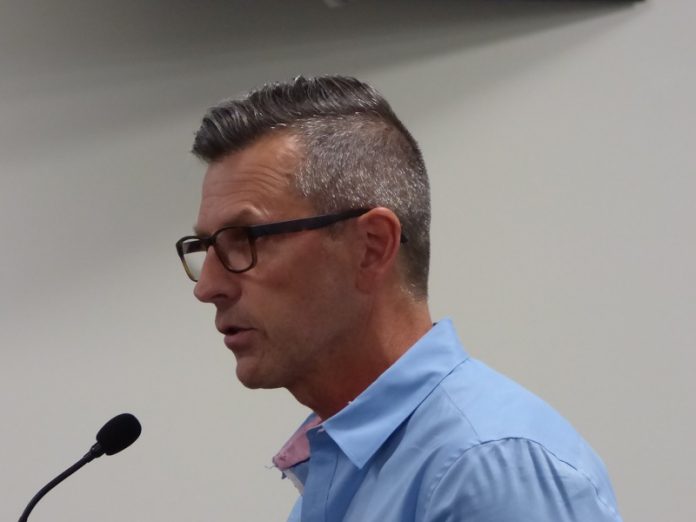 The Fayette County Board of Education on Sept. 23 held the first of two public hearings on the fate of Booth Middle School in Peachtree City. The second hearing will be held Sept. 25 at 6 p.m. at the Lafayette Education Center on Lafayette Avenue in Fayetteville.

The school board in recent meetings has discussed two options for Booth. Option 1 is a “transformational” re-build at the current site at an estimated $40 million, presumably minus approximately $7 million available from the state, while Option 2 is a replacement school to be built off Ga. Highway 54 and Robinson Road that comes with a guaranteed maximum price of $46 million.

The Booth replacement school would be situated between on the city’s far east side, between Carriage Lane off Ga. Highway 54 and Stagecoach Road off Robinson Road.

Facilities Director Mike Satterfield reviewed both options at the outset of the public hearing.

Carriage Lane resident Brad Williams said constructing the new school would radically transform his neighborhood, saying that the area is not walkable or cartable and referencing the amount of roadway infrastructure that would be required to accommodate a new school, and the impact of traffic that would come with a school serving 1,400 students.

Also opposed to the replacement school was Danny Dolan, who questioned the cost of the replacement school and noted that McIntosh High School is nearly as old as Booth. Dolan also referenced a letter to the editor in The Citizen from ESPLOST (Education Special Purpose Local Option Sales Tax) co-chairman Neil Sullivan. Mirroring Sullivan’s letter, Dolan said the Booth projects are outside the scope of the voter-approved ESPLOST.

Another Peachtree City resident, Kristin Smith, was in favor of the replacement school over the transformation model.

Whether a transformation or a replacement, former Ga. Department of Education Chief Financial Officer Scott Austensen questioned the safety issues surrounding having 1,400 students in a middle school and the access issues of having a replacement school at the planned location.

Other speakers cited the traffic issues that would come with having the replacement school situated along two, two-lane streets and in close proximity to Hwy. 54.

Commenting on some of the remarks, Superintendent Jody Barrow while referencing the traffic and roadway infrastructure issues, said the school system would move forward with developing full plans if the school board votes to build the replacement school.

“We have to decide which way to go first,” Barrow said.

Just prior to comments from the public, Barrow said funding for the replacement school would come from ESPLOST and capital outlay dollars.

Pertaining to the use of the current school, if the board decides on the replacement school, Barrow said both Southern Crescent Technical Collage and Clayton State University have expressed interest in the current campus. Additionally, the school system’s Center of Innovation now housed at the former Fayetteville Intermediate School in Fayetteville could also transition to the current Booth campus.

Another issue dealing with the replacement school deals with the traffic studies that would be required to address Carriage Lane and/or Stagecoach Road, as well as the intersections at Hwy. 54 at Carriage Lane and Robinson Road.

The school system in the meeting packet information designated as “Q&A” for the Booth Middle Replacement School or Transformational Re-model noted the impact on traffic in the area. Section 4a. reads, “Preliminary traffic studies have been completed by the school district and communicated to the city.”

Yet as of approximately 11 a.m. on Sept. 23, the day of the first public hearing, Peachtree City Manager Jon Rorie confirmed that the city had not received any communication on the traffic studies.

The traffic study is vital because it forms the foundation by which the initial cost of improving streets and intersections, though not necessarily the long-term costs, can be calculated.

Since the school system cannot improve city streets, that burden would fall to the city, if the City Council was asked and approved the expenditure. There are no current SPLOST (Special Purpose Local Option Sales Tax) projects approved by voters that pertain to the streets and intersections included in the traffic study.

Without Peachtree City signing on to pay for the street and intersection improvements, the school board would potentially have to resort to imminent domain to acquire the right-of-way and fund the projects itself. This has not been done by the school board in Fayette County.

Aside from comments at the Sept. 23 public hearing, three-time ESPLOST committee co-chair Neil Sullivan in a letter to the editor at The Citizen earlier in the day lowered the boom on school board members earlier in the day over issues pertaining to Booth.

“The majority of nearly $40 million funding required for either of these projects will come from the recently approved ESPLOST,” Sullivan said. “However, when the FCBOE came to the public to request ‘ESPLOST III,’ they did not ask for more than $40 million for a new middle school; instead they asked for $10 million to renovate the gym and cafeteria at Booth as part of an approximate $70 million pool for repairs and improvements to all of our schools.

Sullivan noted that his letter was not about whether or not to build a new Booth is warranted or necessary. The intent of the letter was “to raise a concern about the transparency of the process and completeness of the information.”

“While some suggest there is urgency needed for this decision, nothing has changed since before the ESPLOST election either in the structure of the building, student population, or excellent educational results. The only measurable change is in the amount of money the FCBOE has to spend, thanks to the ESPLOST,” Sullivan continued. “At the $10 million discussed, Booth would have been approximately 13 percent of the renovations budget. Now we are talking about more than 50 percent of the current renovations budget, and nearly 25 percent of the total expected ESPLOST collections. What projects at which schools will be cancelled to pay for this school?”