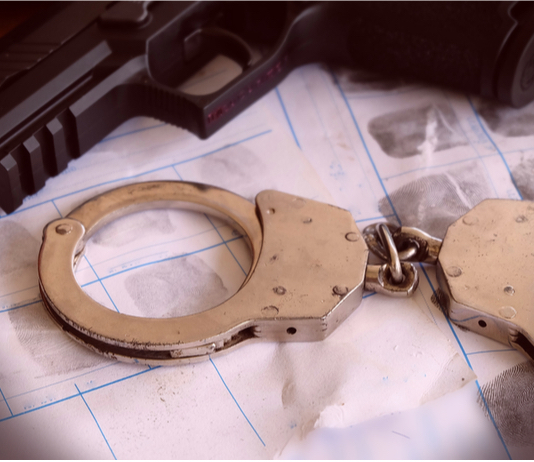 Fayetteville resident Kyle C. Sims and two Riverdale men have been indicted in federal court for selling illegal guns and drugs out of a store in Riverdale.

Sims (aka K-Rock), 33, who was arrested on May 31, along with 24-year-old Riverdale resident Pete Armour (aka Petey), were charged with possessing a machine gun, which they sold for $1,250 in cash. Sims and Fields were also charged with conspiring to distribute marijuana, cocaine, heroin, methamphetamine and Xanax. Sims was also charged with two counts of possessing a firearm after being convicted of a felony, said U.S. Attorney Byung J. “BJay” Pak.

Also charged was Herman A. Fields (aka Tip), 38, of Riverdale, though he is currently a fugitive, Pak said.

According to Pak, the indictment and other information presented in court: Sims and Fields allegedly worked together to sell a variety of guns and drugs out of a T-shirt printing shop in Riverdale. Through undercover operations in the spring and summer of 2019, the ATF bought marijuana, cocaine, heroin, methamphetamine, and Xanax from Sims and Fields.

Pak said using connections with various individuals, Sims also offered his customers a wide range of firearms for cash, with no questions asked, no ID check and without the paperwork required for a legal gun purchase. Through the same undercover operations, the ATF allegedly purchased 9mm pistols and a machine gun at the storefront.

Sims and Armour were charged with possessing a machinegun. The machine gun was a Norinco, MAK-90 Sporter (7.62 x 39mm caliber), with the shoulder stock removed. Allegedly, Armour, with assistance from Sims, sold the machine gun and a high capacity magazine on May 16 for $1,250 in cash. Under federal law, the term “machine gun” includes any weapon which automatically shoots more than one shot, without manual reloading, by a single function of the trigger, Pak said.

Both Sims and Fields have been previously convicted of felony drug offenses, said Pak.

Sims is a registered sex offender, and was on probation at the time of the criminal conduct alleged in the indictment. Sims was arrested on May 31. On Aug. 6, a federal magistrate judge entered a detention order holding Sims pending further proceedings in this case, said Pak.

Pak said Sims was additionally charged with two counts of being a felon in possession of a firearm. Those charges relate to 9mm pistols that Sims allegedly sold in April and May, 2019. Sims also has two prior felony convictions for possessing a firearm after being convicted of a felony.

“Illegal possession and sales of firearms goes hand in hand with drug trafficking and violence,” said Pak. “In this case, law enforcement quickly put an end to the defendants’ illicit business.”