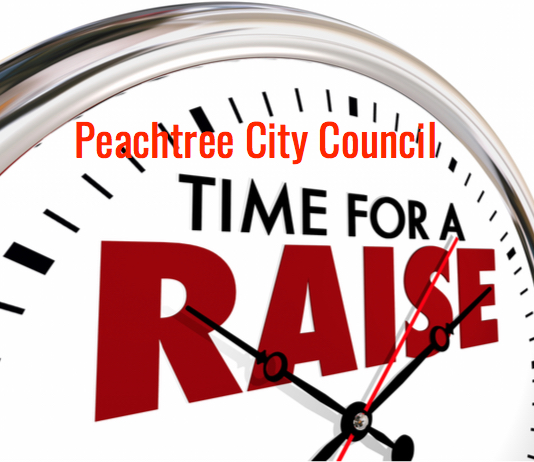 It came near the end of a public hearing on a $39.3 million proposed Peachtree City budget: Discussion of a 20 percent raise for the five council positions.

Two councilmen whose posts are up for reelection this fall — Mike King and Phil Prebor — said they didn’t want a raise, while the three members who have no such reckoning with the voters this year said, “Yes, we do want a raise.”

King has already announced he would seek a second full 4-year term, while Prebor — who lost his wife to cancer this summer — has not made an announcement about his plans.

The city will advertise the raise for three weeks, then act on it in August.

The budget features a decline in the bond repayment tax rate of just under two-tenths of one mill while maintaining the same property tax rate as this year’s budget.

The new budget will pay for three additional firefighter/paramedics, an increase in hours worked by police and firefighters that results in more pay, a 2.5 percent cost of living pay increase for all city workers and cash funding for recreation facility improvements and building maintenance.

City Manager Jon Rorie made a list of what was being left out of the new budget: a replacement pool bubble for the aquatic center, 4 pickleball courts, a soccer court, $4 million for artificial turf for city athletic fields, field lighting upgrades at several sites, tennis center court replacements, and a replacement for the track at Riley Field, next to Peachtree City Elementary School.

“Do you want these items to be on a $10 million general obligation bond that would be decided this fall by city voters?” Rorie asked the council.

After discussing other payment options and coming to no conclusion, the council indicated a consensus: No bond referendum for voters in November. Instead, Mayor Vanessa Fleisch suggested staff draw up a priority list for items on the list. The city will try to pay as it goes to fix the recreation items on the list.

In other action, the council approved rezoning one large lot next to Kedron Hills subdivision to allow five homes where only one is now.

It accepted the budgets for the Convention and Visitors Bureau and Keep Peachtree City Beautiful, sold off an “unbuildable” residential lot on Loblolly Circle that the city has owned since the 1960s,  approved buying a short-wheelbase fire truck with equipment for an eventual new station in Wilksmoor Village, and agreed to work with the Fayette County government in extending the cart path system down Redwine Road to the Starr’s Mill school complex.