It was in March that the Fayette County Board of Education voted to move forward with plans to construct a new Booth Middle School on 37 recently acquired acres on Stagecoach Road near Robinson Road. A small group of neighbors voiced concerns about that decision at the school board’s May 20 meeting. 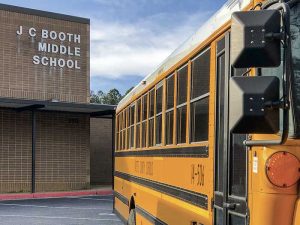 The school board prior to deciding to move forward with plans to construct a new Booth Middle conducted a survey which showed that student and parent representatives, along with faculty, almost overwhelmingly preferred a new school. Responses from the community were more mixed, with some questioning the cost and the location on the far east side of the city. Others from the community said to spend less money by repurposing the existing school.

Among the speakers questioning the Booth relocation at the May 20 meeting was former middle school principal Larry Manwaring.

“Why build such a large school in the extreme east side of Peachtree City?” Manwaring asked. “I believe a huge middle school won’t benefit children.”

Aside from traffic concerns generated by a school population of 1,500 students, those speaking asked an obvious question — who will pay for the roadway infrastructure required to service the school?

The question was relevant since both streets belong to Peachtree City, and it is questionable as to whether the city would make the needed improvements to have one or both streets improved to handle school traffic.

Also speaking during public comments was parent and Peachtree City resident Scott Austensen. Far from the norm in terms of addressing the school board on matters of finances, Austensen is the former 13-year chief financial officer of the Ga. Department of Education (DOE).

Explaining that he was speaking as a parent, Austensen said, “What I was not able to tell you as (DOE CFO) is what I think the priorities are.” The two were safety and student achievement.

“Anything else, in my mind, is a distraction. So I have two concerns about the new Booth, of course as it relates to money and the size. I’m here to tell you that middle schools are very challenging environments. I’m not sure that putting 1,500 middle school kids in a large building is good for safety,” Austensen said, referencing recent acts of violence in metro Atlanta schools.

“Secondly, I’m going to remind you, we were talking about the progress score. When I was the CFO and my daughter was in the sixth grade, Booth Middle School had a progress score, which is the academic achievement score, that was below the state of Georgia average. And yet when I went to find out what Fayette County was going to do about it, the public comment (from the school system) was that all our schools, taken as a group, are above the state average in academic achievement. That was simply not true.

“So my question is, knowing that there are questions about having a giant school, knowing, in my mind, that the progress score indicated that Booth was a bad school academically, what are you thinking with having a school with 1,500 students?” Austensen said.

“And I don’t mean that rhetorically. I mean look at the longitudinal data that comes to you, that the state board of education provides to you and try to make the case for it, and make sure you’re considering what does 1,500 students mean for academic achievement. Have we understood what happened to Booth? I’m going to tell you, and maybe I’m biased, my daughter was there, I don’t think the kids at Booth were worse than all the other middle schools in Fayette County at the time. I think it’s because you had 1,000 students in a very challenging environment,” Austensen said

It was in January 2013 that Austensen, in his former role as Ga. Dept. of Education Deputy Superintendent for Business and Finance, essentially provided the school board a primer on how not to become insolvent and have the state take over the school system.

“It’s illegal to operate in a deficit unless you have a remediation plan,” Austensen said of the precarious position Fayette would find itself in trouble if necessary cuts were not made to the budget. Cuts were made, and four schools were closed.

With approximately 20,400 students at the time, Fayette’s student enrollment in 2013 was back to where it had been more than a decade earlier.

Fayette’s student enrollment today is a bit shy of 20,400.