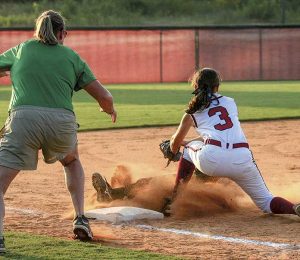 One curse of human nature is that good intentions mixed with authority often result in the urge to crank out new rules that just might pound things apart like an ax where the precision of a scalpel would do a less damaging job.

A group of accomplished young ladies, listed below, have raised a current example that begs for reconsideration. The 2019 Board of the Peachtree City Girls Softball Association (PTCGSA) enacted a new policy effective June 1 that only parents of enrolled players are eligible to serve as head coaches for recreational play. That means Mike Pullias, whose daughters are no longer enrolled in the recreational league, can no longer be a head coach.

You might wonder who Mike Pullias is, and why you should care. I will tell you.

As I write this on Saturday, May 11, I am reminded that my daughter Melanie graduated yesterday at the Terry School of Business at UGA, and that in 2005, when she was a 7-year-old tyke, I enrolled her in the girls softball league, the PTCGSA.

I got lucky. Her very first coach was Mike Pullias, with Bill Wade assisting. In her first practice at bat, Melanie stood on home plate squarely facing Mike, who was pitching to teach beginner girls to swing at the ball. He gently showed her to stand in the batter’s box facing 1st base, thus beginning her very slow transformation.

I learned over some years that a cosmic dictionary would surely include under “softball coach” the mugshot of Mike Pullias. Confucius would differ and call him “teacher,” which would also be high praise.

In the photo nearby, you can only see Melanie’s feet emerge from the dust from her favorite maneuver — stealing 3rd base — in her freshman year on the McIntosh High School softball team, where she earned a varsity letter all four years.

During those four years Melanie served as an example, and sometimes a mentor, to younger players. All that began with Mike showing her with far more patience and skill than I have, to try again and again and again to do something that seemed to her impossible, until her face lit up with proud accomplishment when she finally did it, and the stretching of her to push her own envelope never stopped.

Other coaches come to mind, like Bill Wade, Jeff Minix, John Powers and others, but Mike Pullias was always the big dog, the passionate leader, the coach too many parents wanted for their kid, the coach too many girls wanted to lead them because he taught and motivated and inspired them to reach a little deeper into their gut to focus sharper, swing harder, run faster than they ever had before, and then reach a little deeper on the next play. They liked being challenged to be better than they were yesterday.

I thought when I signed up Melanie for softball that she would have fun learning to play the game. I never dreamed that she would walk taller, be more self-confident in everything she does, routinely pour every shred of energy she had into a practice then take it up another notch in a game.

I didn’t realize how important it would be to who she has become to learn how to do very hard things on the field, to demand the best from herself and her teammates, to walk on the field for a game as a warrior, part of a unified team larger than herself, to spend herself completely in a battle to win while playing honorably, keeping sacred the respect for authority, winning graciously, accepting defeat, always determined that when they couldn’t win, making sure the victors knew they had been in a fight. She learned from Mike not just softball, but principles for life.

I have watched coaches – in recreational ball for Pete’s sake – storm into the dugout and throw things in anger, pitching a fit when their team lost. Not Mike Pullias. After a game Mike would always gather his players on an outfield patch of grass far enough away for a little privacy in the open, and review with them calmly what just happened, the good things – way to go! – and the ooops that we want to avoid, give them some encouragement, and he did it the same way whether they won or lost so they walked away feeling good to be part of that team and determined to do it better next time.

In between games these pretty young creatures who make themselves gorgeous for a date or a dance would flop down on their equipment bag for a few lazy moments with sweat carving paths on their dusty faces and making them smell like a goat, maybe engage in a small belching contest after a quick bite and drink, ignore the arm scrape from a slide or maybe apply a Band-Aid, fist-bump each other and get ready to go kick some butt in the next game, fired up with each other and proud of the hard things they had learned to do that other girls at school would never even try.

Mike Pullias was a little crazy in his dedication to teaching girls to be their best at this sport. He arranged his personal life around it. When the budget was pinched he quietly paid for things out of his wallet the league couldn’t afford and never said a word or sought reimbursement.

When a parent called to say “Mike, my kid has trouble batting …“ Mike would say “Bring her to the fields (day/time) and we’ll work on it.” He is a perpetual motion machine with girl’s softball, and as his wife Beth will attest, when he sits down for more than five minutes, he’s asleep. Like the girls he coaches, he gives it his all.

With their new rule, the PTCGSA Board is kissing off Mike Pullias’ contributions, past and future. I wonder if they realize how much he transformed the League when change was sorely needed years ago.

I was on the PTCGSA Board with Mike when he was president for five years. As a newly elected leader, Mike was able to persuade coaches to change their priority to developing girls into improving players, and he weeded out the coaches who didn’t buy into that part of recreational softball.

We had some “Daddy-ball” coaches making their own daughter the team’s purpose, and we had a few coaches so focused on winning they let weak players rot on the bench. Mike Pullias put a stop to that, and he taught coaches as well as players on his own team. The mission of the recreational league was for every kid to play, and to develop them into better players. That happened because of the commitment and passion and talent of Mike and the coaches who supported him.

Mike Pullias is one example of a priceless resource that shouldn’t be rendered obsolete by a short-sighted policy. I don’t even know who is on the PTCGSA Board now, but I hope they carefully consider the summarized message below from young ladies who learned for themselves that Coach Mike leaves large footprints and has been an important part of who they have become:

“Coach Mike Pullias introduced many of us to the sport when we were very young. This man has a gift —not just as a coach for the sport of softball, but as a coach for life. He truly cares about each and every girl he coaches and is part of the reason many of us are who we are today. We want the next generation of young Fayette County softball girls to also have the gift of Coach Mike. Please reconsider the rule you have enacted.”

[Terry Garlock of Peachtree City occasionally contributes a column to The Citizen. His email is tlg.opinion@gmail.com.]