Despite negative reviews from the Planning Commission and city planning staff, the Peachtree City Council May 2 voted to rezone just under six acres near the TDK Boulevard-Ga. Highway 74 South intersection to allow construction of a 107-room Hilton Home2 Suites extended stay hotel.

The hotel will be accessed from two side streets, Widget Drive and Exchange Place.

The vote was 3-to-1 to approve the change from Light Industrial — which no longer permits developments like hotels — to Limited Use Commercial. Mayor Vanessa Fleisch was the lone negative vote, which came with no on-the-record-explanation.

Councilman Mike King said he didn’t want to be hypocritical about keeping the restrictive zoning when a number of commercial uses — including a Days Inn motel across Hwy. 74 — already existed within yards of the Mike Hyde property. Councilmen Terry Ernst and Kevin Madden agreed. Councilman Phil Prebor was absent.

Mike Hyde’s company, Hyde Investments, had sued a previous City Council in 2007 over the same parcel and won a summary judgment against the city to allow development of that parcel. Although at various times, a Lowe’s Home Improvement Center and a small retail center were considering the site, nothing came of those proposals and the parcel sat undeveloped after the court case until now. 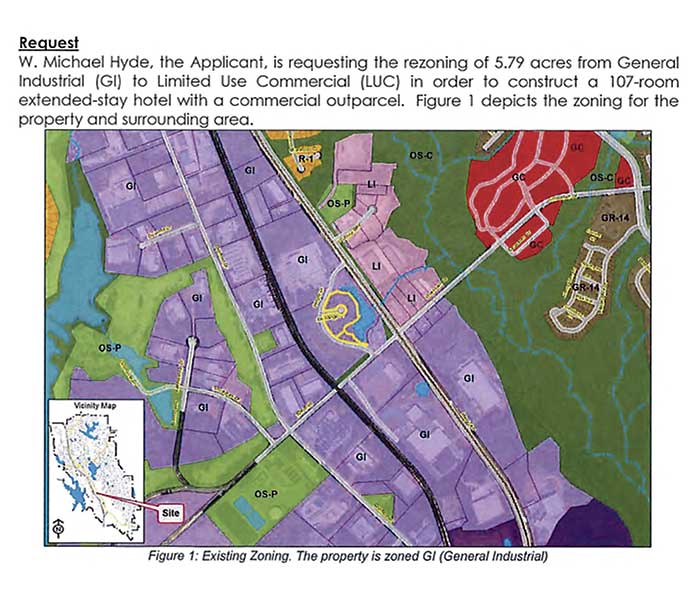