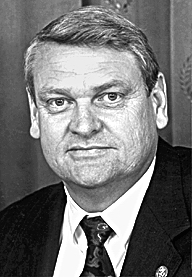 While guiding and growing the company fulfilled his entrepreneurial spirit, Mac nurtured a deeper desire to serve his community, state and nation. That desire came naturally as Mac’s role model was his mother, the first woman to serve on the Flovilla City Council.

His path to elected office was not without challenges. He began his political career as a Democrat and ran for the Butts County Commission twice before being elected on his third try in 1976. Mac switched parties in 1981 and became the County’s first GOP Chairman.

In 1984, he ran for the Georgia State Senate. He lost that contest and again in 1986 before winning a seat in the Georgia Senate Chamber in 1988. Mac was one of only 11 Republicans in the State Senate at that time. He has been considered as one of the architects in helping build the Georgia Republican Party into the dominant force it is today.

In 1992, he made a successful bid for Congress, winning the first of six terms in the U.S House of Representatives. Two years later, Mac won a coveted seat on the House Ways and Means Committee charged with jurisdiction over half of all legislation in the House including, taxes, trade, Medicare and Social Security.

Mac was named a Deputy Majority Whip and helped secure votes for legislation pending before the House. He also helped pass key components of the Contract with America and was later selected to serve on the U.S. House Permanent Select Committee on Intelligence, the primary committee charged with the oversight of the United States Intelligence Community.

In 1994, he ran for the U.S. Senate. When the bid fell short Mac returned to Georgia to devote time to his family and farm outside Jackson. In 2014, Governor Nathan Deal appointed Mac to the State Board of Corrections.

Mac was a devout Christian and cherished his faith. That faith brought him joy and sustained him during challenging times. While his family and friends will miss his smile, his laugh, his sense of humor and love of life they know he has gone home to be with our Lord.

They mourn his passing but also celebrate a life well lived by an honorable man.

Funeral servics for Michael Allen “Mac” Collins, Sr. will be held on Sunday, November 25, 2018 at 3 p.m. at Rock Springs Church, Milner, GA. Dr. Phil DeMore and Dr. Benny Tate will officiate with the interment in the Jackson City Cemetery. The family will receive friends at Rock Springs Church from 1-3 p.m.

Haisten Funeral Home of Jackson is handling the arrangements for the Collins family.