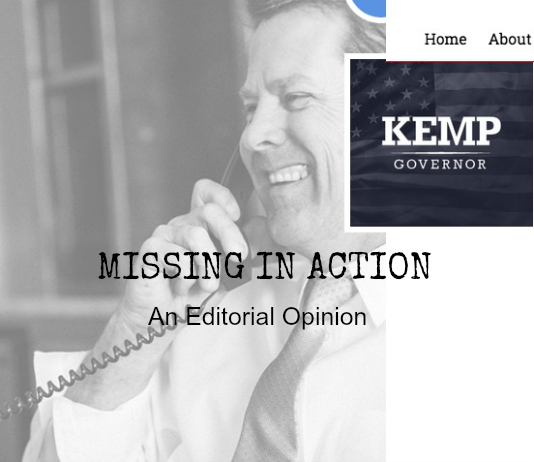 OPINION — As editor of a weekly newspaper in an Atlanta suburb, I routinely get a lot of emails and publicity about political candidates.

This political season about the only candidates I’m seeing anything about are Democrats.

I’m getting several emails a day from and about the Stacy Abrams for governor campaign.

I’m reliably informed that a guy named Kemp won the Republican primary. In fact I voted for that name on the ballot. I think he is currently the secretary of state.

My question is this: Has Mr. Kemp been kidnapped? Should we declare an Amber Alert for a missing Republican at the top of the state ticket?

He seems to have disappeared from everyday politics. I haven’t received anything from him or his campaign — in fact, nothing from anybody with an R after their name — for weeks.

Abrams is on TV, she’s in the big city newspaper, she’s even a mural on a building, she’s what people are talking about.

Brian Kemp seems to be be mostly an absence, a vacuum where one might have expected some energy, some activity, some serious campaigning, some indication that he is trying to get people to vote for him.

I’m not living in a cave. I’ve got internet. If Mr. Kemp were recovering from a political coma, I think I would have heard about it.

Republicans, do you have a viable candidate in the gubernatorial race? Surely you are not colluding in the Resistance that wants to turn this once reliably Red state into the vivid blue socialist republic of Georgia? Right?

I take one assertion back: I hear from the Fayette Republican Women about their upcoming meetings. I appreciate their energy. At least a few Republicans have some.

Mostly, state Republicans, especially in the governor’s race, seem to have forgotten that to run — and win! — a statewide race, you have to at least show up for the game.

So far Mr. Kemp seems missing without action. He seems unable to engage meaningfully. He can’t seem to score points against a candidate who could be scored against at will.

Calling Mr. Kemp. Get out on the field and start acting like you deserve our votes. Go on offense. You are giving this thing away to Democrats. Do something!