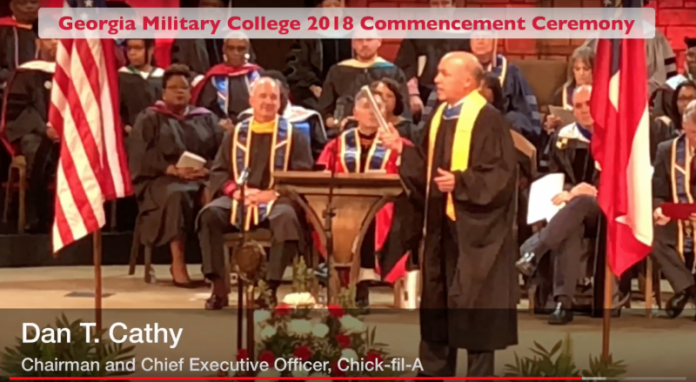 Dan Cathy, Chairman and CEO of Chick-fil-A, challenged 206 graduates from three Georgia Military College campuses to pick up the baton and live a remarkable, “tweetable” life in a commencement address on Saturday, June 2.

Graduates were from three campuses in the greater Atlanta Metropolitan area: 130 from Fairburn, 57 from Fayetteville, and 19 from Stone Mountain. The class along with family members and friends filled every seat and spilled into the foyer at New Hope Baptist Church in Fayetteville.

Introducing Cathy, Georgia Military College President LTG William B. Caldwell, IV, US Army (Ret.), said the Fayetteville campus of GMC exists because of Cathy. One of the nation’s best-known businessmen addressed graduates standing in the sanctuary of the church where for 17 years he taught 11th and 12th grade Sunday School classes. He heads an organization which, according to Cathy,  employs 100,000 young adults age 17 to 22 across America.

He is invested in the next generation and his advice to them is to “lean forward into the future.”

“Embrace all of it,” the CEO encouraged, as he noted the dramatic change every industry is facing.

Dan Cathy has worked for the family business since he was nine years old, cleaning the gum from under tables and singing songs for customers at the original Dwarf House in Hapeville. His name tag, which notes 48 years of service, is also inscribed with the words “In Training.”

“I’m a lifelong learner,” he said, encouraging students to be lifelong students of change, to perpetually redefine who they are.

“Redefine who you are but not whose you are,” Cathy said.

“This is my life every day as I lead Chick-fil-A,” Cathy said, holding up his cell phone again.  “It’s about leaning forward into the future with new tools to redefine an incredibly changing economy. What would the Chick-fil-A drive-thru be today without iPads and our app?”

Holding up a New Testament, he said, “But this also is a big part of my life.”

“We’re known for our service,” Cathy said. “Where does our service mantra come from? It comes from Matthew 5:41. Jesus himself says when someone asks you to go one mile, go with them the second mile.”

“Why do we have fresh flowers on our tables,” he asked. “Why do we say ‘my pleasure’? Why do we have fresh ground pepper? Because we realize that the first mile is all about a transaction, but the second mile – when we treat people with honor, dignity, and respect – is about a relationship.”

Why does Chick-fil-a want to have a relationship with their customers?

“Because it’s a part of our corporate purpose to glorify God by being a faithful steward of all that’s entrusted to us and to have a positive influence on all that come in contact with Chick-fil-A,” Cathy said.

“Your life is about having meaning and influence on a society and culture that is desperately in need of the skills that you have received from Georgia Military College,” Cathy said.

Cathy described commencement as “one of the great ceremonies in civilization,” as a time when a baton is passed to graduates.

“Succession is all about a really great baton handoff,” he said.

“The baton handoff is one of the most important exchanges in a relay race,” Cathy explained. “The arms of the runners in the handoff have to be perfectly in sync… It’s a seamless event.”

“It’s very important that the person receiving the baton takes it out of the hand of the person that is handing it off,” he said. “If they don’t take it out of their hand, it dramatically increases the chances that it might drop.”

“Can you imagine how awful it is to train a lifetime to perhaps even be in the Olympics and then hear someone across the field drop the baton that you worked so hard to try to pick up?”

“It’s the death call,” Cathy exclaimed. “It sounds horrible. It’s a killer to hear somebody drop the baton. All we have to do is open up the newspaper, or turn on the TV to see what happens when people drop the baton. It’s terribly disappointing.”

Dan Cathy personally passed a baton inscribed with the words “Be Remarkable” to each graduate as they crossed the stage to pick up their associate degrees.

“I hope as you accept this baton and that you’ll take it and all the responsibilities that it carries with it and that you will stay in stride, not break stride,” he urged. “Continue your educational pursuit. Continue to be a lifelong learner.”

“Live a remarkable life,” he said. “Live a tweetable life. Live the one and only life that you have. I pray to God that you make a difference in society and this culture. That you take this baton. That you run with courage. Don’t drop the baton.”

His final words of advice?