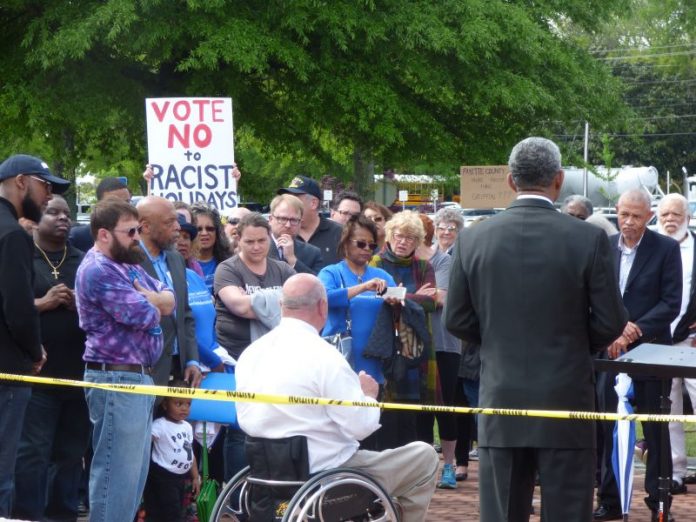 A large rally protesting a proclamation by the Sons of Confederate Veterans was held outside the Fayette County Commission chambers on April 24 prior to the commission meeting. Among those speaking was commission Chairman Eric Maxwell, front center. To Maxwell’s left was Fayette County Board of Education member Leonard Presberg and, to his right, Commissioner Charles Rousseau. Photo/Ben Nelms.

A proclamation before the Fayette County Commission on April 24 recognizing April as Confederate History and Heritage Month and April 26 as Confederate Memorial Day was withdrawn during the meeting at the request of the petitioner.

Commissioner Chuck Oddo, after a break during public comments on the agenda item, said he had spoken during the break with representatives of the Sons of Confederate Veterans.

“They are saddened that it turned out the way that (the mass objection to the proclamation) it did. They were hoping the proclamation was for them. It didn’t turn out the way they expected. If he could, he said he would not have done it. He did it because he doesn’t believe in the things we all don’t believe in, and he is very emotionally frustrated. He has asked me to announce that they are withdrawing their petition for the proclamation,” Oddo said.
It was at that point that the room burst into applause.

Oddo said the Sons of Confederate Veterans indicated they would be willing to meet to come up with something that would be beneficial to all parties.

“So when the had is extended, you graciously accept it. So that’s what I did a few minutes ago,” said Oddo.

A number of public speakers had expressed their opinion on the proclamation prior to the announcement, both inside the commission chambers and outside at a rally prior to the meeting that was attended by approximately 150 people. Those numbers increased to 200 once the meeting began.

“How do we start to fix the problems when we’re still celebrating the Confederacy?” Fayette County Board of Education member Leonard Presberg asked at the rally.

“I don’t see giving a proclamation to a Confederate flag and honoring it, in that that is treason. That’s treason,” Benoit said. “And anyone who votes for it, you are a treasonist. The Confederacy didn’t have anything to do with winning a war. It had to do with maintaining their slaves.”

Also speaking was Scott Gilbert, with the Sons of Confederate Veterans.

“Our organization wrote the proclamation. I am the leader of that organization. If you disagree with history, that’s fine. We do not intentionally do anything to hurt our community, to offend anybody. We do not tolerate membership in our organization that would do those things” Gilbert said. “There are symbols in this room, there are symbols in the parking lot. The very documents that give us the freedom to be here tonight cannot and will not pass the political correctness test that some in this room would impose on us. If you ever go down that road, you will never, ever be allowed to come back.”

Another speaker was District 64 state Rep. Derrick Jackson, who said he strongly opposed the proclamation.

Referencing the proclamation, Jackson focused on the word “patriotism” included in it.

“Please do not try to convey that patriotism and treason synonymous,” Jackson said.

Also taking the podium was Fayette resident Eric Woods, who also spoke on the use of “patriotism” in the proclamation. Confederate soldiers did not take an oath to defend the U.S. Constitution, said Woods.

A large number of speakers addressed the board, the majority of which were opposed to the proclamation