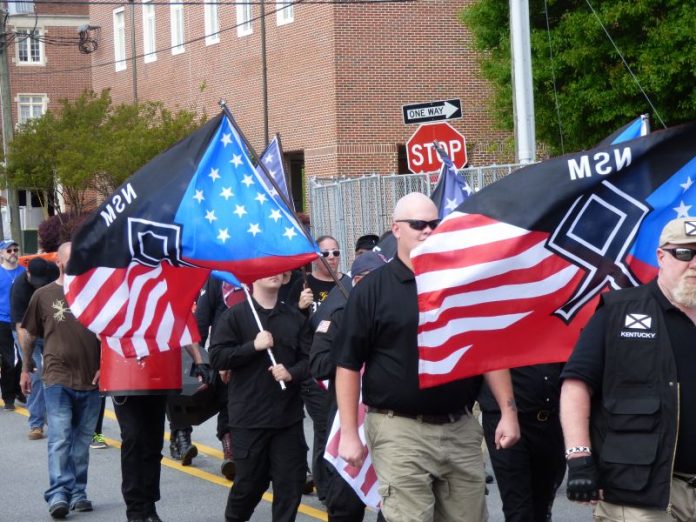 An April 21 rally by the neo-Nazi National Socialist Movement and the presence of counter-protesters in downtown Newnan were no match for the hundreds of law enforcement officers who were there to keep the peace. Photo/Ben Nelms.

The area on the south side of downtown Newnan on April 21 was the scene of a rally by the neo-Nazi National Socialist Movement (NSM). Those protesting the rally assembled across the barricaded street from the rally site at Greenville Street Park. Perhaps the most striking aspect of the events Saturday afternoon was not the rally or those protesting it. It was the presence of hundreds of officers spread across downtown, representing 40 law enforcement agencies.

Newnan officials after the NSM rally reported 10 arrests around downtown Newnan, with none of those involving property damage.

The neo-Nazi group of approximately 50 members entered LaGrange Street from Gilbert Street and marched to the park a block away. With streets in the vicinity of the park blocked off, and with a large contingent of officers present, no one was present in the area when the NSM group made their way to the park.

They entered the park at 4 p.m., one hour late, and proceeded to with the rally. The park was surrounded by barricades forming the base of a tall fence.

On the other side of the park, the Greenville Street side, were those that turned out to watch the rally or protest it. The view from where the crowd was assembled made the view of the park difficult, given the line of officers in riot gear that lined the west side of Greenville Street, positioned between both groups.

It was difficult to gauge the number of Antifa supporters present in the area on the east side of Greenville Street across from the park. That was the area where anyone passing the checkpoint could assemble. Crowd estimates in that cordoned-off area numbered several hundred, of which the majority were reportedly residents there to see and respond to the NSM rally across the street.

Some in the crowd of onlookers reported that the Antifa supporters, or at least most of them, did not gain entrance through the checkpoint and left the area.

During and after the rally there was a large number of people in the downtown area around the historic courthouse. Many stores, including restaurants, were closed, but the people were present.

Also present were countless officers, with many in riot gear, surrounding the cordoned-off courthouse. Others were on the sidewalks throughout the downtown area.

Newnan resident Parker Webb was downtown after the rally with family members and was a spectator across from the park.

Not part of any group, Webb said, “I’m very pleased that law enforcement is keeping our town safe.”

Tiffany Andrews, another Newnan resident, attended the rally with relatives. Andrews said she was there to support Newnan’s citizens and the black community.

There were occasional comments from sporadic people on the sidewalks geared to engender conflict, but those were quickly dispersed by officers as a crowd began to form around the person.

Yet there was much more happening in Newnan than the scheduled rally by the neo-Nazi NSM group or the counter-protest, or the lack thereof, by Antifa.

It was the response to the NSM event by Newnan residents that came with reported hundreds attending an interfaith prayer rally at the Greenville Street Park on Friday. It was one that brought a wide range of people to the park for a common cause – to promote the message that God’s love conquers all. For those attending, color did not matter, age did not matter, gender did not matter. Only love mattered.

But there was more. At the park and across areas of downtown, countless displays of chalk art denoted endless aspects of respect, tolerance and Christian love.

But there was still more, with signs reading “Newnan Strong!”

Perhaps a sign from the Newnan First United Methodist Church noting the words of 1 John 4:18 summed it up: There is no fear in love, but perfect love casts out fear.

During the NSM rally, another was being held at Lynch Park. The Interfaith Rally Against Hate was another manifestation of the community’s commitment to show that love conquers.

April 21 came with the NSM rally, a presence of Antifa and a large number of area residents across from Greenville Street Park and downtown. But before and during that time, countless residents of Newnan and Coweta County openly showed that unity through God’s love is what best unites a community.