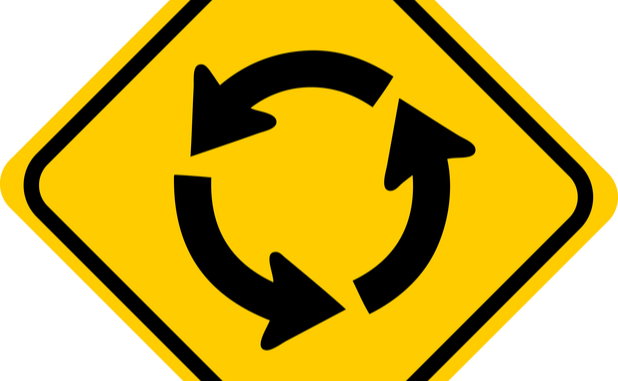 A Feb. 8 majority vote of the Fayette County Commission not to be responsible for moving county water lines for the state roundabout projects along Ga. Highway 92 South at Antioch and Seay roads may have seemed to kill those projects, but the Ga. Department of Transportation (DOT) may have other plans.

The Citizen asked commissioners to respond questions pertaining to their individual votes and how they would explain their action if a subsequent serious injury or death occurred at the unimproved state highway intersections for which the county could have acted as they did in late 2017 to use county funds to install a $1 million roundabout a short distance away on county roads.

Fayette County commissioners by a 3-1 vote on Feb. 8 agreed to inform DOT that Fayette is no longer interested in the two roundabouts to be located on Ga. Highway 92 South at Seay Road and Antioch Road.

The vote to essentially kill the $8 million dual-roundabout highway safety project came because the majority of commissioners did not believe it appropriate to spend the $779,000 required to move county water lines out of the state’s right-of-way. The motion also included the request that the $8 million be used for other priority projects in the county.

Commissioners in December asked DOT officials to consider absorbing some of that cost, with DOT in a Feb. 8 email saying that will not occur.

Commissioners objected to the county having to spend $779,000 to move county water lines out of the state right-of-way. The vote was 3-1, with commissioners Randy Ognio, Charles Rousseau and Steve Brown in favor. Oddo was opposed. Chairman Eric Maxwell was unable to attend.

The project, which has been on the state’s planning timeline for years, would have led to the installation of two nearby roundabouts on Hwy. 92 South, at Seay Road and Antioch Road, with a price tag of $8 million. The project also included installing a four-lane roadway with a continuous median between the two roundabouts. That move was due to the anticipation that, at some future date, Hwy. 92 South could be four-laned.

A Feb. 13 email from DOT District 3, five days after the commission meeting, was reviewed by Fayette County Public Works Director Phil Mallon and by Fayette County Water System Director Lee Pope. Pope in an email to County Administrator Steve Rapson stated his belief that DOT would be moving forward with the roundabouts project.

Mallon on Feb. 16 said he spoke with DOT project manager Sam Allen about the project, coming away with the expectation that DOT is moving forward with construction of the roundabouts. The bid for the project could be let in June.

Commissioners last week were each asked questions pertaining to the roundabout issue and the board’s Feb. 8 vote. With the exception of Commissioner Steve Brown, all commissioners responded to the questions.

One of the questions posed to commissioners asked why each voted they way they did.

• Maxwell in his response said, “I would have voted to accept DOT’s plan and paid the $900,000 to move the water lines. Anytime a state agency is giving the county a 9-1 or 10-1 ratio on the money to improve public safety then I will vote for that project.”

• Ognio responded, saying, “I have never voted to approve anything to do with these roundabouts. I feel the two roundabouts are too close together and the traffic is too much. There is also the issue of introducing pedestrian traffic to these intersections which I feel is dangerous.“

• Oddo provided a three-fold response. One issue noted the time taken for planning the project, given that traffic safety improvements for the area was on the county’s 1990 transportation plan, appeared on the 2004 SPLOST list and was reaffirmed on the

county’s 2010 transportation plan. Secondly, traffic safety improvement projects come with the need for DOT, and its fiduciary responsibility to state taxpayers, to be able to rely on the commission for long-time collaboration on roadway projects. Lastly, the project would have allowed Fayette to take advantage of the state’s economy of scale, thereby moving the water lines at a lower cost than the county could secure on its own.

• Rousseau in his response said, “I firmly realize that the county’s water system is in DOT’s right-of-way. However, I was under the impression we might be able to get them to assist and or wave that cost. Unfortunately, their response ‘the night of’ our meeting (despite our request 2 weeks ago) seemed callous and with no sense of urgency. Therefore, I cast my vote against this project and in favor of saving money in hopes I could one day bring public water to (the communities that need county water.)”

Rousseau added that, “Since my vote, I have been advised that my reluctance to vote for this project may cost the county substantially more should DOT decide to proceed. Therefore, I have asked to have this matter reconsidered should DOT confirm they are moving forward despite our objections.”

While not a pleasant question to pose, commissioners nonetheless were asked what they would say to the family of the person that is seriously injured or dead if DOT pulls out of the project based on the vote by commissioners.

• Maxwell in his response said, “I hope I never have to discuss the Fayette (Commission) failing to improve on public safety with the family of someone seriously hurt or killed at that intersection. I would have no words of comfort for a family that loses a friend or family member at those two unimproved intersections. I do not understand, how this board of commissioners can approve the improvements of Antioch Road and Goza Road for about the same dollars as what we were asked to do by DOT to improve these two intersections. Particularly since these two intersections are on a high-speed state highway.”

• Rousseau responding to the question said, “When I weigh my options against impossible choices, someone’s home that provides shelter and is filled with precious memories moves to the top of my list. Since last year, I have advocated for us to get a better grasp on county neighborhoods being serviced by private well systems. These communities can often be found to be without a ‘higher’ level of fire suppression apparatus (hydrants) to better serve them in the event of a fire.”

• Ognio answered saying, “What if we had voted to proceed and a pedestrian gets hit and killed trying to cross? There is always the possibility that something bad could happen here, but for the most part this has been one of the safer intersections on the state highways in the county. Why is that money not being used to fund improvements to the more dangerous intersections?”

• Oddo in response said, “While I voted to approve the (memo of understanding) and believe we should have proceeded with the roundabouts, but could also be said that had the money been spent elsewhere rather than on roundabouts, it might have prevented an injury or saved a life elsewhere that would not now be saved because the money was spent on the roundabouts. The question is a two-edged sword. It’s a guessing game we can’t win. I hope to God we are not confronted with that possibility.”

In terms accidents at the two nearby intersections, what does the data say? DOT’s 2015 Concept Report, supplied by Fayette County and pertaining to the intersection at Hwy. 92 South and Antioch Road, showed crash data from 2009-2013 indicating that nine correctible crashes occurred at the intersection, resulting in one injury and one fatality.

DOT data for Hwy. 92 South and Seay Road/Harp Road for the 2009-2013 period showed nine correctible crashes with five injuries. Of those crashes, 44 percent were angle collisions with two resulting injuries. A safety improvement project has been recommended for this intersection to reduce the crash frequency and severity while also reducing congestion, the DOT report said.

DOT in the report said, “Angle collisions are often high-speed, high-impact crashes which often result in serious injuries or fatalities.”