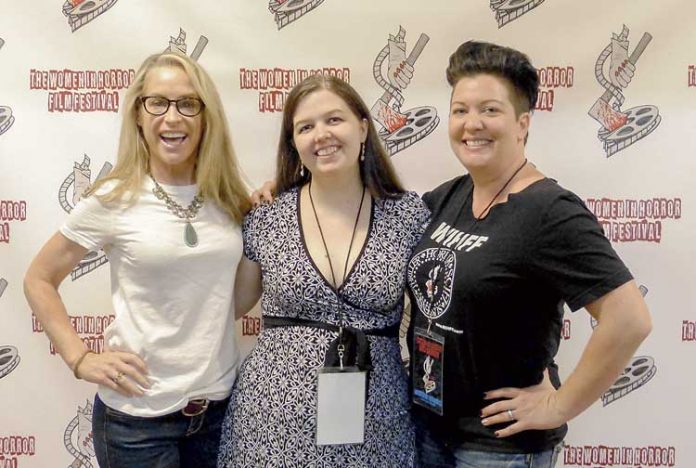 WIHFF showcased the talents of female filmmakers and screenwriters from across the country and around the world.

Above, from left, Amanda Wyss, star of the original “A Nightmare on Elm Street,” joins WIHFF directors, Samantha Kolesnik and Vanessa Wright, at the Peachtree City festival. Amanda served as a guest judge and panelist during the weekend. Her newest role will be in the Stan Lee-produced “The Sandman,” an original horror movie for TV, on SyFy channel in October. Photo/Bonnie Helander.

Festival Director Vanessa Wright was enthusiastic about the festival. “I think this is an opportunity to celebrate women in film and the integral role that we play both on and off the screen,” Wright said.

Festival Director Samantha Kolesnik agreed and added, “As a huge fan of genre films, and as someone who really enjoys working with diverse creative teams, I’m excited to launch this festival to celebrate and honor the tremendous work being produced by talented women creatives and their colleagues.”

Horror film and screenplay finalists were selected to have their work featured and judged by an independent panel of judges during the weekend event. Categories for judging included feature films, short films, student films, and screenplays.

Guest judges and panelists included Marianne Maddalena (producer of “Scream 1, 2, 3 and 4,” “The Hills Have Eyes,” and “The Last House on the Left”), and actors Heather Langenkamp and Amanda Wyss (“A Nightmare on Elm Street”).

Over 200 people attended the festival throughout the inaugural weekend, and festival directors are enthusiastic about hosting the 2nd Annual WIHFF in Peachtree City Sept. 20-23, 2018. Festival organizers encourage the public to make plans to attend.

According to Samantha Kolesnik, “Many of these feature length and short films will only be seen here at our event. It is an opportunity for the general public to view unique and creative work and enjoy the next wave of horror filmmakers – maybe even meet the next Wes Craven!”