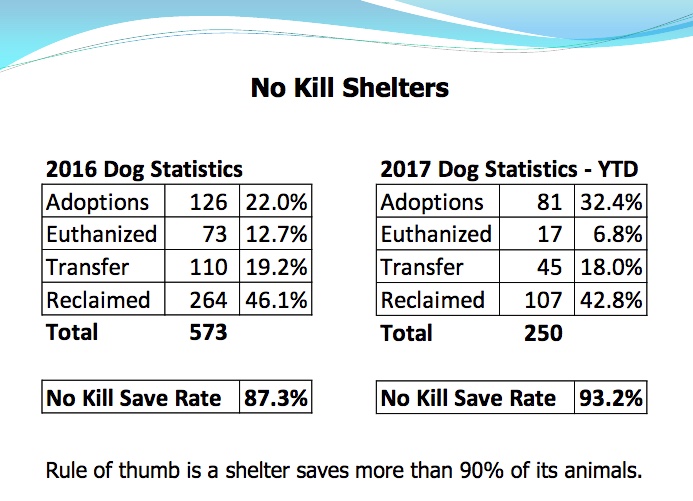 There were plenty of people at the Aug. 10 meeting of the Fayette County Commission advocating for commissioners to approve a continued review of the proposed animal ordinance. The motion to do so failed for lack of a second after four hours of discussion and comments on a variety or related topics.

Above, Graphic prepared by the Fayette County Animal Shelter giving statistics for 2016 and year to date 2017 on dogs in its care.

Commissioner Steve Brown near the end of the discussion that included nearly two hours of public comment made a motion to reverse the previous vote on July 13 that restricted access to the staff and county attorney related to the animal ordinance revisions.

“We’re at a situation where we’re at a stalemate with doing the ordinances,” said Brown. “We need the approval of the attorney because what happens is that if you bring this forward in the state it was in, the first question that comes up is ‘Has the attorney vetted this?’ And the answer would be ‘No.’”

Brown said he believed the revision was worth doing and worth pursuing.

His motion was followed by nearly a dozen people speaking on the motion. Many of those were part of the wealth of public speakers who had addressed various aspects of the animal shelter operation and proposed ordinance earlier in the meeting.

Brown then restated the motion. The motion failed for the lack of a second, ending discussion on the agenda item.

Chairman Eric Maxwell earlier in the meeting said he had provided County Manager Steve Rapson with a list of questions pertaining to options for the animal shelter for which he wanted an answer, given that he did not know enough about the topic.

Maxwell after Rapson’s presentation said the agenda item was for discussion, not for action.

Rapson’s presentation included several issues previously brought up at earlier meetings and others that had not been presented before.

Though not requested by humane groups, a part of Rapson’s presentation, and based on Maxwell’s request, dealt with possible future options for the facility.

Option 1 would include renovation and expansion of the shelter to move from 16 dog runs to 40, replacing the roof, connecting the facility to the sewer system and adding required staff due to the expansion for a cost of approximately $451,000.

Option 2 would include adding a new 24-run building next to the existing facility, connecting the sewer and adding needed additional staffing at a cost of approximately $1.165 million.

Option 3 would include constructing a new facility on the site, connecting to sewer and adding needed staff for approximately $1.6 million.

Rapson noted that the currently facility needs to be connected to sewer at an approximate cost of $120,000.

Commenting on animal shelter statistics, Rapson said the “save rate” for dogs year-to-date is 94.1 percent while rate for cats is 89 percent. The benchmark for maintaining a “No Kill” shelter is 90 percent, he said.

Rapson also commented on the recently-established adoption process which involves notification to local humane and adoption groups on Day 6 and 20.

Rapson said animal shelter staff will be formally trained on conducting the Behavioral Assessment Reactivity Checklist (BARC) as part of the intake process.