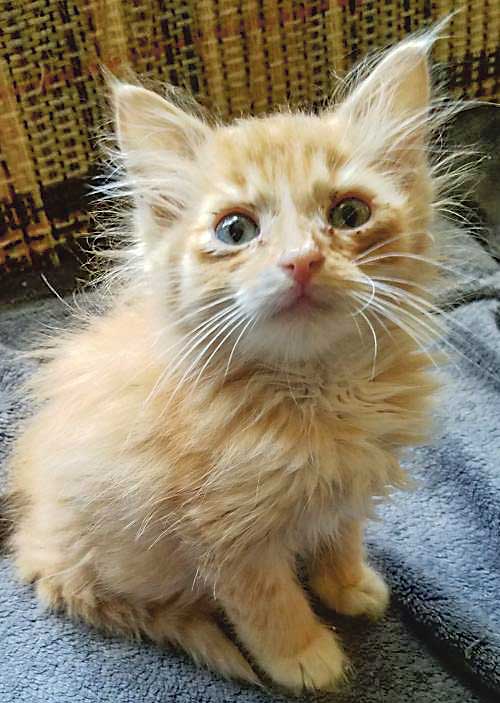 How long should crowded shelter keep animals before putting them down? Some say current policy of 5 days should be extended to 30 for adoptable pets

The Fayette County Commission on July 13 will consider a policy on animal shelter management and euthanasia. The proposed policy would extend the potential for euthanasia from the current five days to 30 days for adoptable animals.

Animal shelter Director Jerry Collins on Monday said the current policy includes a 5-day hold before the determination on euthanasia is made for adoptable animals. The extension of that limit is one of the provisions of the proposed policy.

CORRECTION — In the photo above, Butch, a domestic long-hair male, was found in Riverdale and brought to the Fayette County Humane Society, a private charity. He has since been adopted. Photo from the humane society’s website (http://fayettehumane.org).

According to county staff, residents earlier in the year expressed concerns over the existing policy of euthanasia. Staff reviewed the policy and agreed it should be amended for a longer grace period past the five-day impoundments period to allow for a longer adoption period. The goal was to provide for a reasonable amount of time for an animal to remain at the shelter to encourage adoptions and rescues.

The policy establishes a three-step approach to enhance adoptable animal management. The policy provides an additional 25 days past the required hold period, creates a notification process for appropriate humane and rescue agencies and establishes a capacity threshold of 75 percent of available cages.

The proposed policy states that, “Euthanasia is normally reserved for animals that are suffering mentally, physically, terminally ill or considered dangerous to themselves, other animals, and/or humans. Euthanasia for reasons due to insufficient operational capacity is established when capacity reaches 75 percent of available cages, leaving the remaining 25 percent to be free to be utilized for required stratification of dangerous animals; isolate sick; puppies and manageability of shelter.”

Notice to the owner of impounded animals will be sent and a five-day impoundment period enacted to reach the pet owner. If the owner cannot be located, it will be the duty of the director or his/her designee to determine adoptability of the animal.

When an animal has been deemed adoptable, there will be an additional 25 days past the 5-day hold required allowing for possible adoption. Five days prior to the end of the cumulative 30 days staff will send a notification to the appropriate humane and rescue agencies that describes the animal and informs the agencies that the animal may be in danger of possible being euthanized.

If the animal is not deemed adoptable the director or his/her designee will notify the appropriate humane and rescue agencies in writing with the determination. The notice will advise that at the end of the five-day hold that the animal may be euthanized.

The proposed changes were put into place and several meetings with local humane and adoption groups were conducted to obtain additional feedback. The proposed policy incorporates several of those considerations and will provide staff clear guidelines for shelter management/euthanasia, county staff said.

Also at the meeting, commissioners will consider approving $119,568 for the renovation of the animal shelter building. While both interior and exterior work will be performed, the renovation will also include the addition of a new fenced area in the rear of the facility to provide additional kennels for dogs brought to the shelter, according to staff reports.

Starting Thursday, July 13, 2017, the Board of Commissioners’ regularly scheduled meetings will move from 7 p.m. to 6:30 p.m. All subsequent meetings will be held at the new 6:30 p.m. time. The meetings will continue to be held in the Public Meeting room located at 140 Stonewall Avenue West, Fayetteville, GA 30214.

CORRECTION — The photo accompanying this article was taken from the website of a private charity, the Fayette County Humane Society, and NOT from the publicly funded Fayette County Animal Shelter. Butch, the cat, was taken in by Kitten Foster Volunteer Courtney Daisey — who photographed Butch originally and provided the photo to the Humane Society for use on its website — and later placed for adoption. Butch has never been at the county facility, Daisey said. For more information on the Fayette Humane Society, including information about other animals available for adoption, go to the society’s website — http://fayettehumane.org.