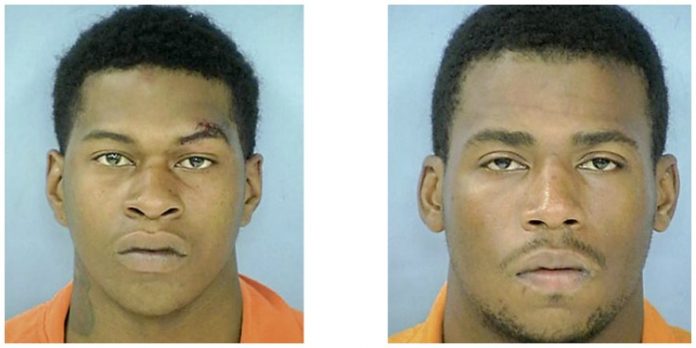 Two men are in custody on murder charges and a third is being sought in connection to a June 23 home invasion in south Fayette County that resulted in the stabbing death of 74-year-old Albert E. DeMagnus, a computer services company CEO.

Jeffrey Lee Wallace, 22, of Atlanta, and Kavion Wyzeenski Tookes, 21, of Decatur, were charged with murder, according to Fayette County jail records.

The two stole DeMagnus’s Lexus and tried to elude a pursuing deputy, but crashed in south Fayetteville and ran into nearby woods, Sheriff Barry Babb said.

Sheriff’s deputies and officers with the Fayetteville Police Department set up a large perimeter and relied on K-9 units to track the two men, Babb said.

One of the two men, was located a quarter-mile from the crash site at 4:41 a.m., while the second man was located on Ga. Highway 92 South around daybreak and taken into custody, Babb said.

Babb said a patrol officer stationed at a checkpoint was told by a Lyft driver that she was in route to a location inside the perimeter to pick up a fare.

The driver had a silver Chevy sedan that looked like Babb’s vehicle. In a move Babb referred to as a “Trojan Horse,” the sheriff and three officers took Babb’s car and proceeded to the location on Lake Circle Drive a short distance away.

Officers exited the vehicle when the suspect was spotted. He ran into the wood line approximately 100 yards away, but could not escape the reach of deputies who quickly took the man into custody.

Babb said that the third man is being sought.

“We’re confident that the case is progressing and that we will find the third person,” said Babb.

Babb during a June 23 press conference said deputies at approximately 2:30 a.m. on June 23 responded to a “shot person” call at a residence on Lake Horton Landing Drive off Brooks Woolsey Road in south Fayette.

Deputies arrived and found DeMagnus with an apparent stab wound. He was transported to Piedmont Fayette Hospital where he was pronounced deceased, Babb said.

Babb said the victim’s wife woke to a disturbance in the home, thinking the noise came from a television. But it was the attack on her husband and the struggle that was occurring that the woman witnessed, said Babb, adding that the woman saw three black males in the residence and her husband suffering from a stab wound.

The home invaders were demanding jewelry and money, Babb said.

Babb said two of the men stole the homeowner’s gray Lexus, at which point the victim’s wife called 911. The third home invader apparently left the scene of the home invasion in an unknown vehicle that arrived at the home prior to the crime.

A lookout was issued and the vehicle was spotted by a deputy in south Fayette in close proximity to the home where the incident occurred.

The deputy passed the stolen vehicle which was traveling at a high rate of speed and began the pursuit, Babb said, adding that the suspect’s attempt to elude the deputy resulted in the Lexus traveling at speeds of 130 miles per hour.

The stolen vehicle crashed in the area of Jimmie Mayfield Boulevard and Bradley Drive in Fayetteville and the two men fled on foot, said Babb, noting that a firearm was recovered from the vehicle. The crash scene was literally just yards away from the Fayetteville Police Headquarters building.

DeMagnus is listed on the Ga. Secretary of State website as the CEO, CFO and Secretary of Computer Management Services, Inc. (CMS), a Maryland corporation. CMS is an Information Technology augmentation firm providing services to Fortune 500 Companies, the federal government, and state and local agencies, according to CMS.