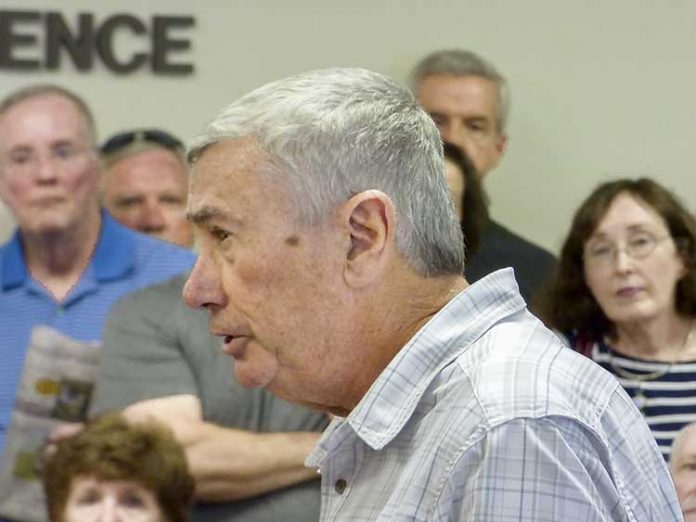 The recent training received by Fayette County School System nurses on how to talk with students who ask questions about gender issues brought an unusually high number of residents to the June 19 meeting of the Fayette County Board of Education.

Of the 30 people who signed up to speak during public comments, the large majority had their say on the issue first reported by The Citizen in early June. More than a dozen residents said that the training has no place in Fayette schools while up to 10 supported the school system’s initiative.

The public comments brought no response from either board members or school system officials, as is customary.

The issue first surfaced in The Citizen’s front page story June 7, followed by several letters to the editor in subsequent issues.

Prior to the June 19 meeting, email alerts from board member Leonard Presberg — who also is the county chairman of the Democratic Party — and the Fayette County NAACP were sent out to encourage LGBTQ supporters to come to the board meeting to counter the expected contingent that disagreed with the system’s decision.

Central to the comments was the recent statement by Superintendent Jody Barrow, who responded to questions by The Citizen in the June 7 issue on the nature of the training.

“Recently our school nurses received an introduction to ‘Understanding Gender and Supporting Transgender Students.’ A representative from the Georgia Safe Schools Coalition, who is also a Welcoming Schools facilitator, conducted the presentation,” said Barrow. “The training was provided at the request of the nurses so they could better understand how to help and how to talk to families and children who are addressing these issues.”

For their part, those in attendance, which included a much larger number of residents than customarily attend school board meetings, left no room for error on which side of the issue they supported.

“It’s hard today for some children,” said parent Katherine Furlong. “This is an excellent opportunity to give nurses the information firsthand.”

That position was echoed by retired first grade teacher Susan Naschke, who commended the school system for taking the initiative and providing the training for nurses.

“Not all parents communicate issues like this to their children. Then it falls to the nurses,” she said.

Vicki Leopold speaking in opposition to the training said it adds stress and confusion for children.

“This is not a medical issue. It’s a political statement, not an educational one,” she said.

“Will it stay with the nurses or will it go to the classroom?” resident Jenny Davis asked. “Some things need to be addressed at home.”

One of the speakers also opposed to the training had additional words for the school board that went beyond the topic of gender identity training.

“I ask forgiveness for not being here before. We’re going to be listening to you. Our children have been taught a lie,” said resident Judy Wilson. “This is Fayette County, not New York or San Francisco. We won’t stand by quietly anymore.”

It was certain that the topic of gender identity training brought the meeting to overflow on June 19, with the meeting room and the office entry area filled with people.

Aside from parents who come to have their children receive an award then promptly leave the meeting, the large numbers seen on June 19 are usually reserved for topics such as school redistricting or when school system staff are facing pay cuts, as was the case during the Great Recession.

For the great majority of meetings, and after the awards are presented, the meeting room is largely populated only with school system employees.

Regardless of the topic at any school board meeting, and with property taxes currently at 19.75 mills, the reality is that the school board levies far more taxes than any other governmental body, yet enjoys far less public scrutiny than any of Fayette’s local governments.