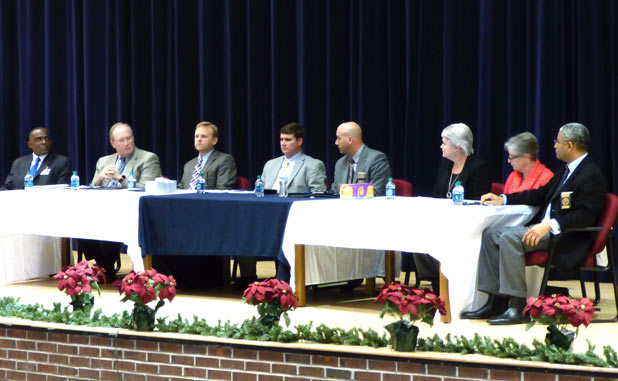 Sandy Creek High School students had their say at the Dec. 7 Community Awareness Seminar sponsored by the Fayette County School System. Many of the comments and questions dealt with what some students referenced as incidents of harassment and racial slurs and a lack of response by school administration.

In all, 160 people attended the meeting. The majority of those were students or young people attending with their parents. It was clearly the largest attendance at a community awareness event in the past several years.

Sponsored by the school system, and with a host of panel members from across the county, topics at the meeting were expected to include law enforcement issues with citizens and using deadly force; race relations in Fayette County, the school system and society; the political climate in Fayette County following the presidential election; the nation’s election process; and getting along with others who have opposing views.

Some of those topics may their way into the meeting. Yet from nearly the beginning, and with few exceptions, the majority of questions and comments dealt with school-related issues.

The questions, posed essentially by minority students, centered on hate crimes and the distinction, if any, between a verbal hate crime and free speech. Others questions noted what was believed to be a difference in approach when dealing with harassing language and racial slurs between students.

A number of questions and comments centered on Sandy Creek students believing that the person accused of racial slurs was not disciplined. It was clear during the meeting that many of the black students believed their issues were not sufficiently heard or acknowledged by school administrators.

Principal Robert Hunter and Superintendent Jody Barrow in a number of responses said school system policies and the students code of conduct were followed.

Citing legal parameters dealing with confidentiality involving student disciplinary issues, Barrow on Thursday reiterated what he said at the meeting.

“It would not be appropriate (to discuss those disciplinary outcomes with other students). We have to be sensitive on the need to know and what can be said. There is confidentiality involved. If something specific happens we will address it. We many not be able to talk about the specifics. If the shoe was on the other foot, people wouldn’t want us to talk about them,” said Barrow.

Other questions and comments pertained to what was said to be school officials not following up on claims by some students of harassment and recipients of racial slurs, including after the November presidential election.

Citing an example of what can, but should not, happen, Hunter noted that a milk carton had been thrown at a student because he was believed to be a Trump supporter. The student was white and was a Clinton supporter, Hunter said.

Barrow at the meeting and on Thursday said he believed some of the sentiment being expressed was fresh because of the election.

“Some people are celebratory, some are sad. Some people win, some people lose” Barrow said Thursday. “We want to be sensitive to that. Civil discussions are valuable in a society. What we were trying to do was to accomplish that.”

Also at the meeting and on the topic of the presidential election, Barrow referenced a letter to students which is available on the school system’s website at www.fcboe.org

Some at the meeting called for similar seminars at the county’s other high schools.

The meeting ended with numerous students with raised hands and wanting to pose additional questions.

The above reflected only a sampling of the types questions and comments at the seminar. As with any community awareness seminar, which are customarily sparsely attended by parents and students, the best way to learn about the topics is to attend the meetings.

The idea behind the meetings, said Sweat, is to be proactive concerning relevant issues of the day. The next meeting is expected in the spring and will concern the dangers of driving while drinking or using drugs.