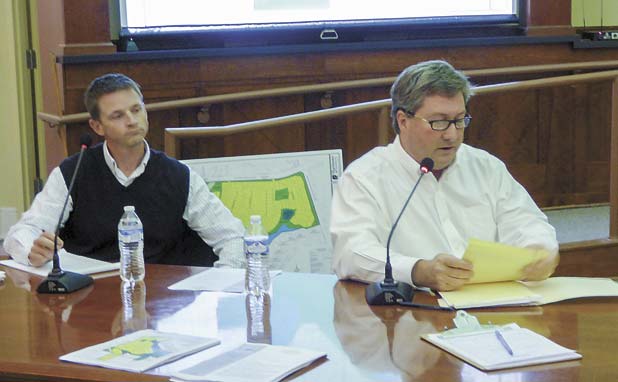 Some Fayetteville residents still dislike Hwy. 92 S. density; developer Rolader modifies southside project to meet objections
Scarbrough and Rolader representative Richard Ferry (L) and owner Bob Rolader at the Nov. 16 meeting of the Fayetteville City Council to discuss the proposed residential development on the city’s south side. Photo/Ben Nelms.
A Nov. 16 town hall meeting of the Fayetteville City Council to discuss the proposed residential development along the Ga. Highway 92 Extension on the city’s south side had Bob Rolader eliminating the townhome portion of the project and increasing the minimum home size. That said, area residents opposed to the development were largely unimpressed.
Already zoned for a large amount of retail and 66 townhomes from a previous zoning, Rolader had originally proposed 270 homes, with the large majority as single-family detached, in the rezoning and annexation request that was recommended for denial by the Planning and Zoning Commission in October.
Rolader at the Nov. 16 meeting removed the townhome component and decreased the total number of homes from 270 to 233. He also proposed that all homes have a minimum of 1,800 sq. ft.
Rolader on Tuesday said a current survey of home builders in the Fayette market showed construction prices of approximately $100 per sq. ft.
Noting a traffic study completed for the area, Rolader said 233 homes would generate 2,300 trips per day while commercial under the current zoning would generate 10,000-20,000 trips per day.
Rolader told the Planning Commission and City Council members that there were significant business vacancies in the nearby retail area, prompting him to propose a strictly residential development. Rolader said he has owned the property for 46 years.
Commenting on traffic, city staff said their study showed 2,230 residential trips per day and 10,5802-14,320 trips with commercial in place.
Traffic concerns were expressed by numerous area residents at both meetings. Also expressed as a concern was the need for increased police patrols, though city staff said there are four times the amount of crime calls in commercial areas as opposed to residential areas.
Other residents expressed concerns over lot size and the price of homes. Rolader said the proposal has lot sizes at 7,200 sq. ft. City Senior Planner Julie Brown noted that front and rear setbacks are 30 feet while side setbacks are 20 feet.
Price points for the homes will be discussed further along in the development process.
Some residents at the meeting said the city needs better restaurants and asked the council to work to provide those venues for residents.
Mayor Ed Johnson responded, noting that it is up to businesses to want to come to an area. The city cannot make any type of business open in a given area.
“If you’re not growing, you’re not moving forward,” said former Deputy School Superintendent Sam Sweat in response to questions about schools and student enrollment. Sweat also said the school system is not anticipating redistricting school lines for several years.
One of the key issues posed by residents at both meetings dealt with the master plan for the southside developed 15 years ago.
City Attorney David Winkle said a city cannot contract for more than one year and one council cannot bind another council in terms of governmental function.
“This is a development agreement. It’s not a declaration of restrictive covenants,” Winkle said. “Zoning can change if (the property) is not economically useable by the owner. It’s been zoned for commercial and multi-family for 15 years.”
Area resident and business owner Debra Gulas maintained that the southside development agreement is a contract issue, and read from a lengthy, prepared statement to make her point. Gulas also surfaced issues such as the potential for increased crime and compromised property values in the area.
Commenting on crime and property values and speaking in general in response to comments by a number of speakers at the meeting, Johnson decried “fear-mongering to get people riled up. We’ve heard several incorrect things here tonight. It’s incomprehensible that we can’t work together.”
Responding to one resident’s comment about the development putting profits over people, Johnson said, “That’s far from the truth for this council.”
City Manager Ray Gibson toward the conclusion of the meeting said it might be appropriate for the council at the Dec. 1 to refer the matter back to planning commissioners since Rolader removed the townhomes from the proposal.
Councilmen Jim Williams and Paul Oddo did not attend the meeting due to medical issues.