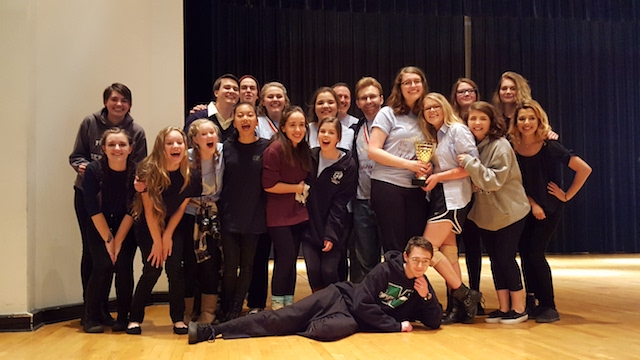 Additionally, Kenzie Knudson was awarded Best Actress for her portrayal of Olive, the leader of the women and the moral center of the play.

At the regional competition Oct. 22, the play won first place and swept all of the acting awards. Kenzie Knudson was named Best Actress and Joshua Sussman won Best Actor for the role of George, a cynical American agent whose actions result in the main conflict of the play.

Named to the All Star Cast were Claire Hemenway, who plays a grieving mother, and Wylie Watlington, who plays a cleaning woman who is smarter than she first appears. This marks Hemenway’s second time in the All Star Cast, after being named to it in 2014 for her work in the play “Five Kinds of Silence.”

In addition, the entire cast, including Jacob Mewborn as a father struggling with grief, and Claire Avery and Sydney Brazile as women of Lockerbie, was named Best Ensemble. In the technical roles, both Audrey Landrum, lighting designer, Cullen Finnerty, light operator, and Mykala Johnson, sound designer, and Lynde Macleod, sound, were praised by the judges.

The drama department’s next production will be the musical “Cinderella” Feb. 2-4. There will also be a “Tea Time with the Princesses” Jan. 28. For more information, visit McIntoshTheater.org.