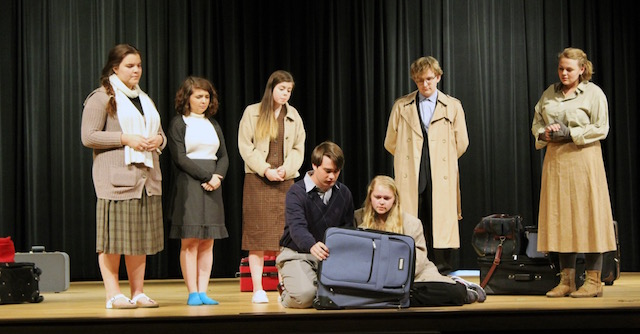 The McIntosh High School drama department will be performing a one-act double feature – including the drama “The Women of Lockerbie” and the comedy “Check Please” – Oct. 13 and 15 at 7 p.m.

Tickets will be available at the door for $8 adults or $5 students, or can be reserved by emailing info@mcintoshtheater.org.

“The Women of Lockerbie” follows a couple from New Jersey who lost a son in the bombing of Pan Am 103. In Lockerbie for a memorial service, they meet a group of women who are fighting the U.S. government to obtain the clothing of the victims found in the plane’s wreckage. The women, determined to convert an act of hatred into an act of love, want to wash the clothes of the dead and return them to the victim’s families. Inspired by a true story and written in the structure of a Greek tragedy, this is a poetic drama about the triumph of love over hate.

Cast member Sydney Brazile, who plays one of the women, is most excited about the show because “the actors have been working really hard to be able to really encompass all of the emotions the people in Lockerbie were feeling when this tragedy happened, and it’s really interesting to see how it’s going to turn out and how the audience is going to receive it.”

Wylie Watlington adds that the message is “really powerful, and everyone in the audience will be affected in some way.”

“Check Please” showcases a series of first dates gone wrong. Guy and Girl sit several tables away from each other and date one odd person after another. The show is directed by senior Kat Elliott, who describes it as “fun and entertaining with a wild cast.”

Sophomore Ava Whiteley reveals, “I love to work on the physical aspects of acting, which is not something a lot of actors are able to work on in depth.”

Finally, senior Julian Soper, playing the role of Guy, shares that his favorite part of the show “would definitely be working with all of the underclassmen who are great, talented actors that I’ve enjoyed spending time with.”

“The Women of Lockerbie” will also be competing Oct. 22 in the regional one-act competition hosted by Whitewater High School. In the past five years, McIntosh has finished either first or second in the regional competition, and twice has placed third at the state competition.