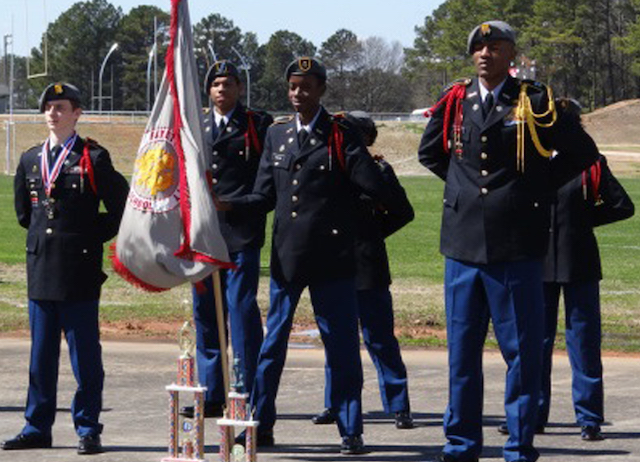 The Army JROTC unit at Fayette County High has been designated as an Honor Unit with Distinction, the highest rating given by the US Army Cadet Command, following the program’s first formal inspection.

As a result, the cadets will receive gold stars to wear on their uniforms, signifying their unit’s designation. Fewer than 10 percent of all high school JROTC programs throughout the nation qualify for the honor.

“Our cadet staff did an outstanding job of briefing the unit information to the Cadet Command leadership, which led to us to earning the highest rating for a JROTC unit,” said Darryl Langford, lieutenant colonel, U.S. Army (retired) and senior Army instructor at Fayette County High.

Not only was it the unit’s first-ever inspection, but they were also one of the first schools in the 6th Brigade to be evaluated under a newly adopted formal inspection format that falls in line with education standards specified by the JROTC’s curriculum underwriter, AdvancED, which also accredits the school system and its schools.

Just missing a perfect score by one point was the Drill Team and Color Guard, both receiving 14 out of 15 possible points, and Service Learning, which received 19 out of 20 possible points. Additionally, for Continuous Improvement, the unit scored 33.75 out of 35 possible points.