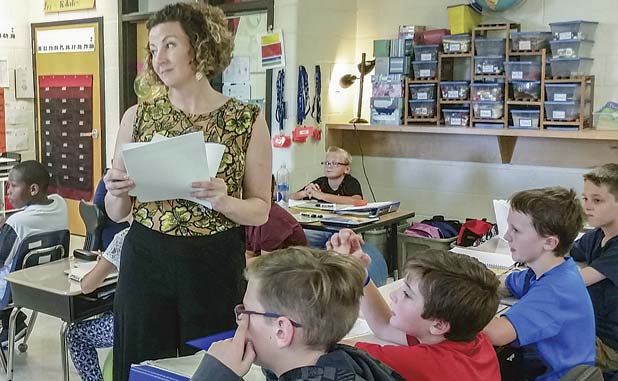 The award honors dedication to the teaching profession, community engagement, professional development, attention to diversity, and advocacy for fellow educators. She was nominated for the national honor by the Georgia Association of Educators, said Coweta County School System spokesman Dean Jackson.

Ladd is in her 13th year of teaching, and has worked as a kindergarten and first grade teacher at Poplar Road. She has served as the school’s Teacher of the Year, Jackson said.

Ladd was one of 43 public educators, and the only teacher from Georgia, who will receive the California Casualty Award for Teaching Excellence at the NEA Foundation’s Salute to Excellence in Education Gala next February, in Washington, D.C. As Georgia’s honoree, she travelled to Washington, D.C., last summer to interview with and teach a sample lesson to a panel of judges for the Horace Mann Award. She will be visited in her classroom by an observational team in October.

Ladd was recognized for her nomination to the national award in August by the Coweta County Board of Education. After her visit before the Horace Mann panel this summer, Ladd told board members that she was overcome with emotion.

“I felt like it shouldn’t have been me,” she said. “It should have been the whole staff at Poplar Road Elementary School.”

The winner of this year’s Horace Mann award will be revealed at the awards Gala on February 10, 2017, and receive an additional $25,000. The awards gala will be livestreamed at neafoundation.org. The NEA Foundation and the National Education Association jointly present the awards.

Because the NEA Foundation values both professional development and diversity, awardees are invited to participate in its Global Learning Fellowship. Fellows learn how to prepare their students for a connected and multicultural world in this comprehensive, year-long professional development program, which includes an international field study next June.

“These outstanding educators are innovators, challengers, and global thinkers,” says Harriet Sanford, NEA Foundation President and CEO. “We are delighted that California Casualty joins us once again in expressing our shared admiration and thanks for their work.”