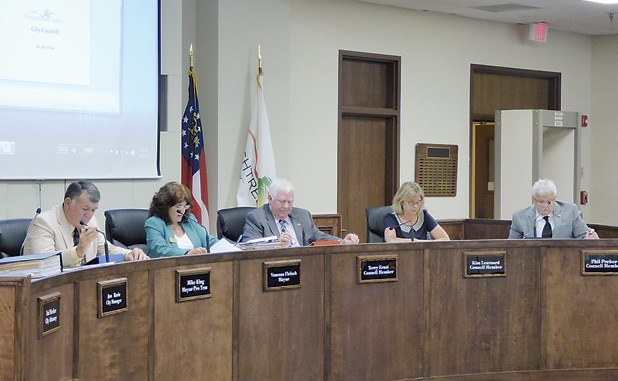 The Peachtree City Council on June 16 approved the items to be included on the city’s SPLOST (special purpose local option sales tax) list. Placement of the SPLOST on the November ballot and other issues will be addressed at the July 14 meeting of the Fayette County Commission.

Items were discussed as Tier 1 and Tier 2 projects. Tier 1 projects are the most pressing and would come into play if the county approves a 5-year SPLOST which gains voter approval in November while Tier 2 project would be funded if a 6-year SPLOST is on the ballot and approved by voters.

A 5-year SPLOST would be expected to generate $37.5 million for the city while a 6-year SPLOST could bring in $45.3 million. Cities are seeking a revenue distribution based on population figures from the 2010 census.

One of the items on the SPLOST list is $2.5 million for a countywide performing arts center. Specific information will be forthcoming at the July 14 meeting of the Fayette County Commission, said City Manager Jon Rorie. Currently known is that the school system has received a $20 million pledge from an anonymous donor for a project expected to cost $40 million or more. Currently unknown are issues such as what percentage of ownership the cities and county would have, who would operate and maintain the center, how center employment would be handled and how any profits would be split.

The city has developed an exhaustive SPLOST projects manual that can be viewed at http://www.peachtree-city.org/DocumentCenter/View/8350.

• The parks and recreation category has $1.02 million in four projects that include a “splash pad” at the Glenloch Recreation Complex, a restroom facility at Line Creek Nature Area Park, a causeway from All Children’s Playground to Drake Field and the development of a passive park on what has long been called Snake Island on Lake Peachtree.

Countywide, a 5-year SPLOST would be expected to generate $116.5 million while a 6-year period would generate $140.6 million.

The County Commission has until Aug. 22 to adopt a resolution calling for the SPLOST vote in November and provide the project lists from the participating local governments.